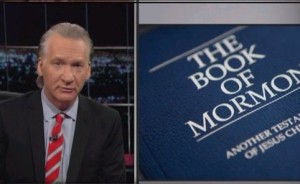 As a bookend to his top-of-the-show interview with Robert Jeffress, Bill Maher simultaneously bashed Mormonism for promoting cult-like beliefs while acknowledging that Mormonism is just as radical a belief as any other mainstream religion. Maher used the opportunity to suggest that candidates like Mitt Romney should be asked about their religious beliefs because a president’s faith definitely influences their decision-making process.

How screwed up does Maher think Mormonism is? “Tom Cruise would not join it, and Glenn Beck did.”

Maher took note of Romney’s GOP rivals finally playing the Mormon card, and suggested that their outrage was unjustified because of how certain Christian beliefs can be seen (depending on who you ask) as being just as bizarre as Mormon beliefs. However, Maher did concede that Mormonism “takes crazy to a whole new level,” suggesting that while all religions are “magic tricks,” Mormonism is a lower-quality, “intelligence-insulting” magic trick.

Then Maher went all the way back to the days of Joseph Smith, explaining how the founder of the Church of Jesus Christ of Latter-Day Saints was arrested for being a con artist long before starting the Mormon faith. Having said that, Maher contended that the Mormon church is no more questionable in its beliefs than other religions.

“Mormonism is just the silly end of a larger problem, which is that religion itself is a con, and it’s a con you pull on your own mind. It’s not unfair to ask serious candidate Mitt Romney if he really believes that Joseph Smith received golden plates from an angel in 1823, and translated them into ‘scripture’ that contains not a single person or place name that has been shown to ever exist. Are you too gullible to be president if you believe in a world full of characters who appear in the historical record exactly as often as leprechauns?”