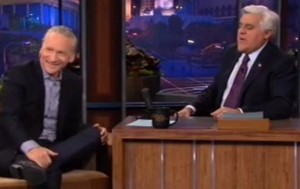 Leno asked Maher “What do you make of Rick Santorum’s surge?”

Leno cut in with an unfortunate overshare. “Or the woman goes, ‘That’s it?'”

Maher went on to observe that this election has recently been sidetracked, from the economy to social wedge issues like contraception and gay marriage. “I think it’s funny that — you know, this election, remember, up until recently, it was going to be — election. all about money, all about deficits and jobs and the deficit and they’re spending too much. This is what the — the Tea Party was so upset about, right?”

Maher continued, “And then, you know, somebody shoves a big gay penis in their face and they jump at it.”

While Maher’s overall point is correct, recent events have this election shaping up to be the Year of the Vagina. From the right’s all out assault on Planned Parenthood (thus far, a spectacular failure), to the Catholic church’s effort to control the vaginae of non-religious employees, to the Republican War on Contraception that the Obama administration drew them into, to the forced vaginal probing law that Virginia’s legislature is now considering, the 2012 election has become a fight for control of vaginas, by the bepenised. Come November, these guys might finally learn that this kind of control should be exercised by kegel muscles, not the government.

Here’s the clip, from The Tonight Show: