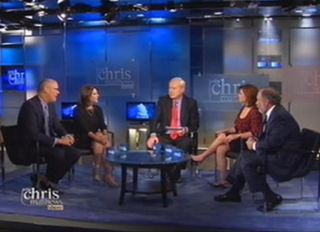 Rep. Michele Bachmann has surged to the status of a frontrunner in the first primary state of Iowa, and now faces the general election hurdle of her opposition to gay rights being a hallmark of her campaign. This could be fatal to her election chances, John Heilmann argued on The Chris Matthews show today, as it is “anti-Obama animus” that fuels Republican voters nationally, and any sign that independents won’t run to her will weaken her changes at the nomination.

In some ways, the logic that ingratiating herself to the base would lose her the nomination appeared counterintuitive, but Chris Matthews‘s panel seemed to reach some consensus that the anti-gay rhetoric of describing alternate sexuality as slavery would not resonate with voters looking to replace President Barack Obama. Time’s Joe Klein added only that he found the entire mentality strange– “it’s not even a religion,” he argued, noting that neither Jesus nor Moses (“my guy”) “ever mentioned homosexuality,” and that the “incredible liberation” through the gay rights movement had little opposition in the mainstream.”

For some understanding of the language, panelist Kelly O’Donnell noted that “bondage and enslavement are terms used all the time to refer to being in a state of sinfulness” among Christian conservatives, and that the use of the word had nothing to do with the secular understanding of slavery as an industry. This, however, did not assuage Matthews, who noted she was on a secular program when she used the terminology, and Gloria Borger, who added that, regardless of the origin, younger voters would balk at the language. Heilmann agreed, but added that it was more because “anything that makes her look like a less plausible general election candidate makes her less likely to win the nomination.” The sort of language she was currently using, he concluded, was “a slam dunk for Barack Obama”– or so some Republican voters would think, especially those who “want to talk about the economy.”