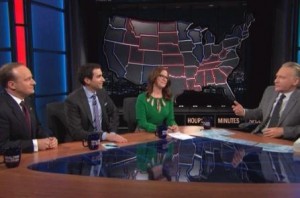 On Real Time with Bill Maher tonight, the host and panel took on the general election race. When Maher brought up the class warfare seemingly being waged between Mitt Romney and President Obama, S.E. Cupp argued that Democrats should not be “demonizing success” and defended Romney by pointing to his charitable donations. Maher shot back by pointing out they were to the Mormon church, and both ended up in a back-in-forth over whether Romney was giving to the poor through the church or not.

After some talk about how both campaigns are trying to capture the youth vote, Maher brought up the Obama campaign’s new tactic of going after Mitt Romney as a radical conservative rather than painting him as a flip-flopper, a strategy that worked when the George W. Bush campaign used it against John Kerry eight years ago. Paul Begala said it was effective then because it was during a time of war and the intent was to portray Kerry as “weak.” And while Begala did not dismiss the notion that Romney is a habitual flip-flopper, he argued that in a time of recession, the Democrats are going after Romney for “amassing power and wealth at the expense of the middle class.”

Cupp admitted she couldn’t figure out why the Obama team has suddenly abandoned a narrative that has worked somewhat effectively against Romney early on in the campaign. She suggested that if the president’s campaign played it smart, they could try to paint Romney as being in alliance with Obama’s policies, only to then argue that the Republican nominee has less experience. Andrew Ross Sorkin agreed with Begala, saying the “right wing crazy person” narrative works better for the Obama team. Cupp shot back, saying they could not honestly make that out to be the case, but Sorkin explained that if the key to winning the election is moderates, Obama can’t afford to imply through accusations of flip-flopping that Romney is a “Massachusetts moderate.”

Maher boiled down Romney’s basic problem with the public to “Mitt Romney is everything the American people hate about a politician.” Yet despite this (or perhaps the two are somewhat correlated), Maher credited Romney for being a “master politician.” He called out the candidate’s “straw man” argument telling Americans who think there’s something wrong with success to “vote for the other guy,” and argued President Obama himself is an example of the kind of success Romney was talking about.

Cupp argued that it shouldn’t matter whose success is worth more than the other’s and that their accomplishments should be equally celebrated. She said that many previous presidents were personally successful and rather wealthy when they came into office. Begala shot back that Obama wants to give young people today the same opportunities for success he had, while Romney wants to close them off. Cupp tried to split the difference between Romney the politician and Romney the person, bringing up his charitable donations to poor people. Maher interrupted her by claiming Romney’s donations were going to the Mormon church.

Cupp argued that he was giving back to the poor through the church, but Maher was having none of it. He dismissed Cupp’s claims as “bullshit,” and she shot back by being amazed that Maher was demonizing “charity based on religion.”