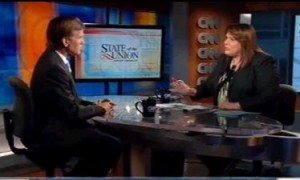 Virginia governor Bob McDonnell hammered President Obama over national unemployment on CNN’s State of the Union today, even while acknowledging that his state’s improved unemployment rate has been a “success story.” Candy Crowley asked McDonnell if those statistics would make it harder for Mitt Romney to argue the state has done worse under Obama. McDonnell insisted it has more to do with successful Republican policies.

Crowley pressed McDonnell on whether the president deserves some credit for the “good fortune that Virginia has.” The governor asked Crowley to explain exactly what she thinks it is the president deserves credit for. He brought up the stimulus as “one-time spending” that may have helped “in the short run,” but has not done much to deal with the economic long term. McDonnell ended by touting himself and the Republican governors all across the country.

But Crowley narrowed in on McDonnell’s faint praise of the stimulus and asked him if that means he gives Obama “a tiny bit of credit” for the state’s economic improvement. McDonnell ended up slightly conceding the point, but not before getting in another example of Obama’s negative impact on the state.

“Sure, I think there’s national policies that have had some impact, but I can tell you this. If we didn’t have all these attacks on Virginia’s energy industry, we’d be in a lot better shape. This president on coal, natural gas, nuclear, not letting us drill offshore… have made it much more difficult for us. We’d be lower on the unemployment rate if we didn’t have these policies.”