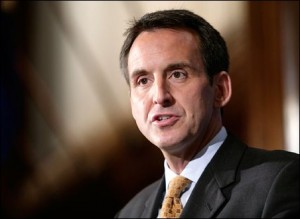 In a statement so rich, Republicans are refusing to tax it, GOP presidential can’tidate Tim Pawlenty (R-The Drain) rhetorically asked CNN’s Candy Crowley of President Obama, “Is he chicken?”

This is the same Tim Pawlenty (R-KFC), you may recall, who refused to repeat his criticism of rival Mitt Romney during a GOP presidential debate in June. Pawlenty also asked, “If you’re the leader of the free world, would you please come to the microphone, and quit hiding in the basement?”

Yes, if only we could get President Obama to step up to a microphone. That guy’s a regular J.D. Salinger. President Obama has been spending more time in the White House briefing room that a C-Span cameraman the past couple of weeks.

Pawlenty’s criticism is part of a Republican drumbeat to get the President to make public the specific concessions he’s willing to make in order to get House Republicans to remove the default gun from the mouth of the US economy. You don’t fuel the jet and present the sack of ransom money until you know that the hostages are going to be released, and there are few hostage takers who would have the balls to demand that the SWAT team help plan their getaway.

The problem here is that there are two issues tied together that shouldn’t be. If Republicans want to see a “plan” to avoid a default, here it is: raise the goddam debt ceiling. Is that specific enough?

In June, President Obama responded to criticism that he hasn’t shown leadership on the default threat (and earned a penile rebuke for his trouble):

And I’ve got to say, I’m very amused when I start hearing comments about, well, the President needs to show more leadership on this. Let me tell you something. Right after we finished dealing with the government shutdown, averting a government shutdown, I called the leaders here together. I said we’ve got to get done — get this done. I put Vice President Biden in charge of a process — that, by the way, has made real progress — but these guys have met, worked through all of these issues. I met with every single caucus for an hour to an hour and a half each — Republican senators, Democratic senators; Republican House, Democratic House. I’ve met with the leaders multiple times. At a certain point, they need to do their job.

And so, this thing, which is just not on the level, where we have meetings and discussions, and we’re working through process, and when they decide they’re not happy with the fact that at some point you’ve got to make a choice, they just all step back and say, well, you know, the President needs to get this done — they need to do their job.

Since then, of course, the President has been an almost daily fixture in the White House briefing room, and has taken a very hands-on approach to negotiations that Republicans keep walking out of. It appears that Republicans only want to be led to where they already are.

His larger criticism, that it was Rep. Paul Ryan who led on deficit reduction and not the President, ignores the fact that Americans overwhelmingly care much less about deficits than they do about jobs (which is what the Republicans ran on in 2010), and that cuts in government spending have already cost the US economy 500,000 public sector jobs, and an unknown number of related private sector jobs. Pressing debt and deficit reduction now is like going to get your fire extinguishers topped off while your house is on fire.

Even so, President Obama, compromiser that he is, played along with Republicans, supporting a deficit commission that they thought up, which those same Republicans then opposed. This forced the President to form the commission via an executive order.

The real point of Pawlenty’s remarks, though, is likely to draw attention to his flagging presidential campaign. Since his refusal to call out Mitt Romney to his face, Pawlenty has tried to recover with increasingly aggressive tactics, but the result has been poll numbers below the margin of error. Calling the President “chicken” would ordinarily be a good way to get attention, but not when you make the charge from within a cloud of your own feathers.