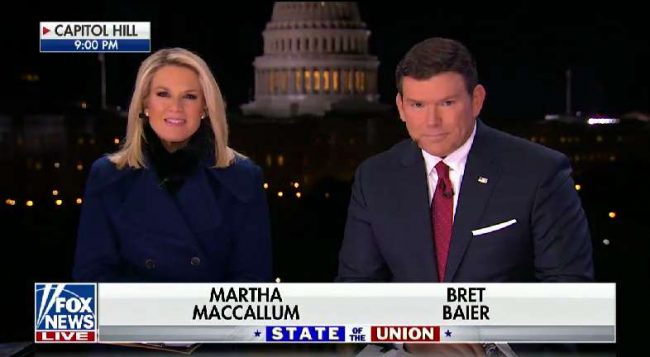 Fox News completely dominated the television coverage of Tuesday night’s State of the Union. And during the period of time that President Donald Trump was speaking to the nation, Fox News not only led the cable news landscape — the network led all of television.

According to Nielsen, Fox News drew 11.5 million total viewers and 3.3 million in the key 25-54 demographic during the State of the Union. CNN finished second in cable news in both metrics, averaging 3.1 million overall viewers and 1.3 million demo viewers. MSNBC captured a total viewership of 2.7 million and 659,000 in the demo.

For comparison’s sake, here’s what the broadcast networks pulled in during the speech, which ran from 9 PM to 10:30 PM:

The SOTU coverage helped propel Fox News to a dominant primetime ratings win. In the 8 PM to 11 PM time slot, FNC averaged 8.8 million total viewers and 2.4 million in the 25-54 audience. CNN and MSNBC finished neck-and-neck in overall viewership as each grabbed 2.5 million viewers. In the key demo, CNN (1.1 million) placed well ahead of MSNBC (614,000).