Giving Context To The Daily Show‘s Megyn Kelly Takedown: They Have A Point 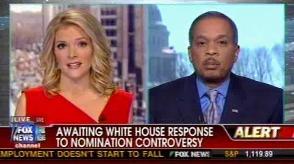 The Daily Show‘s Jon Stewart set out last night to prove FNC anchor Megyn Kelly was not as “fair and balanced” as she is purported to be, and in fairly convincing 10-minute segment they made the point loud and clear.

But the Daily Show was edited to prove that point – so we watched the full two-hour America Live today, and frankly, Stewart has a point.

I’ve watched Kelly’s show periodically since it debuted February 1, but never from start to finish for two hours. And yes, to be fair, it doesn’t give an accurate representation to base an opinion on just one full day. But it does help develop a theme, one that is based on Stewart’s decidedly non-“fair and balanced,” heavily-edited piece and the full show today.

One thing Kelly is not is Sean Hannity. She doesn’t spout talking points, and the show itself is not a GOP-driven show. Those who interpreted Stewart’s segment as proving no difference between opinion-prime time hours on FNC and Kelly’s “news” hour would be wrong. For one reason, a significant portion of the show is completely apolitical. There were several segments today about the cruise ship tragedy, in which a wave killed two passengers. There was a rather heated debate about circumcision and a later “Kelly’s Court” segment over a Hurt Locker lawsuit. She talked about the air traffic controller kid story and a Girl Scout cookie crackdown.

But when the subject drifted to politics, Stewart’s point was proven to some degree. The guests on the show today were Juan Williams (a left-leaning political contributor on FNC), RNC Chair Michael Steele (that interview is here), GOP Congressman Dan Burton, FNC legal analyst Peter Johnson Jr., FOX News Sunday anchor Chris Wallace and Ross Aimer, a United Airlines pilot. Let’s take a look at some of the guests:

• Williams was on to talk about the potential “vote trading” health care story, and, as the chyron said, he was firmly in the ‘yes vote trading’ camp: “Williams: This looks like ‘vote trading’.”

• Kelly worked hard to hold Steele’s feet to the fire over the RNC presentation, and when he tried to change the subject to health care, she continued pressing him about who would be held accountable. While it was a right-wing guest, it was a very balanced interview.

• Rep. Dan Burton was on to talk about a lawyer concerning Navy seals in Fallujah, and while the guest was right-wing, Kelly tried to present both sides. Still, she hedged a question to Burton with, “It’s so disgusting what this man did, this terrorist, and no one watching this program wants anything but justice for him, against him, I should say.” After the interview, she urged viewers to weigh in: “There are arguments on both sides, so let me know what you think.” So yes, there are arguments on both sides, but Kelly makes clear she knows her audience as well.

>>> NEXT PAGE: More analysis, and the Daily Show video.