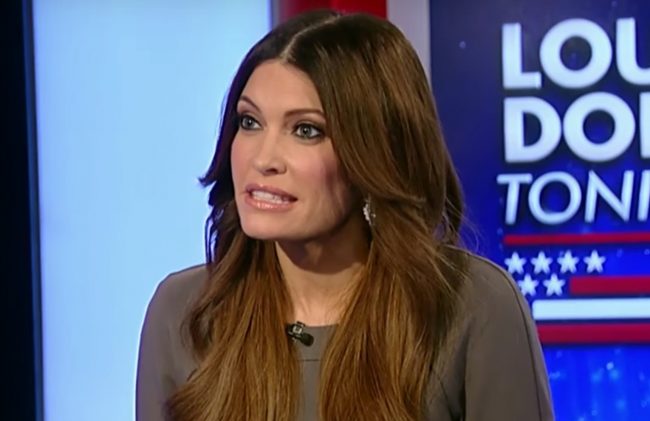 Fox News confirmed in a statement to Mediaite on Friday that Kimberly Guilfoyle is leaving the network.

“FOX News has parted ways with Kimberly Guilfoyle,” the short statement read, confirming reports that the longtime host is departing the network after more than a decade.

Mediaite confirmed that Guilfoyle will not be appearing on The Five on Friday to say farewell. Fox News contributor Katie Pavlich will co-host in her place.

She joined the network 2006, and served as a host on a series of shows, from Outnumbered to, most recently, The Five.

Though a departure from Fox is abrupt and unexpected, the move into pro-Trump politics isn’t too surprising: last year, Trump was reported to have considered Guilfoyle to replace Sean Spicer as White House press secretary, a job she publicly lobbied for.

She has recently become a fixture in the gossip rags thanks to her relationship with Donald Trump Jr., the president’s maladroit son. The couple jetted off on a trip to Europe last week, posting social media dispatches from Paris and Monaco. In her absence, a series of Fox News contributors have filled in for Guilfoyle on The Five.

If Guilfoyle is indeed headed to America First, she’d be joining an organization with some baggage: Mediate reported earlier this year that a policy adviser for the Super PAC was caught on video expressing his disappointment that the Nazis “didn’t keep going”

An adviser to Don Jr. appeared to confirm the move:

Having @kimguilfoyle on the trail campaigning with @DonaldJTrumpJr for Republicans this fall is a win for the entire GOP. Kim is one of the most influential voices in the #MAGA movement and knows how to light up a crowd. https://t.co/WIbS6PKK3P