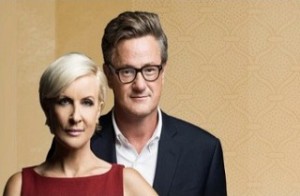 All successful shows eventually go downhill. Sometimes familiarity breeds contempt. Sometimes a reboot or addition (or subtraction) is needed to bring some much needed energy to a set. And in cable news, all of this specifically applies to MSNBC’s Morning Joe, once described as “revolutionary” by Time magazine and once ranked as the top news program on television by the New York Times back in 2008.

Fast forward seven years later and the show is basically the same as it was during that magical run of 2008: Joe Scarborough and Mika Brzezinski are still your primary co-hosts, with Willie Geist as capable third wheel. The other players rotate but are all still the same familiar faces: Mike Barnicle, Mark Halperin, John Heilemann, Donny Deutsch, Mike Allen (Politico), Eugene Robinson, Nicolle Wallace, etc., all brought in to periodically add to the debate. And that’s somewhat a foreign word at MSNBC lately: Debate. The evening programs particularly from Sharpton to Hardball to Hayes to Maddow to O’Donnell rarely offer anything contrarian outside of the usual Republicans are dumb/scary/bad-for-the-country mantra. Say what you will about Fox and CNN…it can’t be argued each brings in differing perspectives to avoid the tediousness of echo chambers. But in Morning Joe’s case, the conversation can actually be interesting at times with Scarborough in the role of chief contrarian. There actually is debate, dialogue, things that make you go hmmmm….

But over the past year, something just doesn’t feel right about the show. The energy level is poor, particularly in the case of Mika and Geist. Frowns and blank stares seem to permeate the set; it’s like that look Bill Murray had in Groundhog Day from watching the same Jeopardy episode over and over again and knowing the answers before they were asked. The passion that was so apparent in ’08 and even as recently as 2012 does not remotely approach the same level.

Proof positive came this past Friday night, when the show was broadcast in primetime for two hours from the site of the Super Bowl. The ratings result was disastrous: 65K in the key 25-54 demo at 8:00 PM and 72K for the second hour at 9:00 PM. For context, Chris Hayes and Rachel Maddow did a 104K and 143K at those hours the night before, respectively. Yes, viewership is lower on Friday nights compared to Thursdays, but that didn’t seem to affect Fox and CNN very much: Fox’s O’Reilly Factor and Kelly File did a 434K and 331K in the demo last Friday night, with Anderson Cooper and a CNN Special at 9:00p doing a 157K and 179K, respectively. Add it all up, and even with a Katy Perry interview and Super Bowl backdrop, the show got beat nearly 7-to-1 by Fox at 8:00 p.m., while CNN had two-and-a-half times the audience at 9:00 PM. And it’s not any prettier in the morning race, either.

So what are the issues? Here’s a few:

Stale format: The other morning shows have rebooted in some capacity (F&F brings in Elisabeth Hasselbeck as Gretchen Carlson moves to her own show at 2:00 PM; New Day–seeing an obvious chemistry issue between Chris Cuomo and Kate Bolduan, turn to Fox morning veteran Alisyn Camerota). Morning Joe? It has stuck with the same players and format for the past seven years: No notable talent tweaks or additions while existing talent gets a bit too comfortable and loses its hunger. Andy Grove once said it best: “Success breeds complacency. Complacency breeds failure. Only the paranoid survive.”

That said, if I was MSNBC President Phil Griffin, I’d create some paranoia since I have the resources to do it via the 30 Rock NBC News Mothership. Bring in someone like Natalie Morales as a newsreader/additional talking head. Why? Because Mika looks far too comfortable, oftentimes disinterested, with Geist not too far behind in that category. Hard to blame them for lacking pop: Getting up at 3:00 a.m. for the past seven-plus years can’t be fun, but that’s what the huge paycheck is for. And while we’re at it on the talent-tweak front, adding the always-interesting, emotion-provoking Ann Coulter to the set (who is a free agent) or James Carville (Fox contract not renewed) or even a Joy Behar (still some air in those tires and hungry to work again) would be a net-gain. More importantly, it would send a clear message to existing talent who appear to believe they’re indispensable that they can be replaced. As for the regular guest rotation, the aforementioned Mike Barnicle and Donny Deutsch just don’t cut it anymore (particularly the latter), and I’m still not sure how exactly Mark Halperin–a much better writer than on-air personality–is allowed to be co-managing editor of Bloomberg Politics, which leads Bloomberg’s political and policy coverage, and still gets to regularly appear on a rival network.

– The Scarborough Factor: At $4 million/year ($99,000/week), Joe ain’t going anywhere. Does Joe offer up opinions that get ink? Yes. Can he carry a morning show for three hours in segments outside of politics on his personality and humor alone? Note: I like Joe and used to appear on his show fairly often, but the answer is no. Adding any of the powder kegs mentioned above (Coulter, Behar, Carville) would take that load off of Joe, who far too often dominates the program with meandering dialogue and way-too-long monologues disguised as questions.

– Lazy producing: Alex Korson is the executive producer of Morning Joe, but appears to have fallen into the same complacency trap as the on-air folks. For example, does anyone else notice the same set of Joe-Mika photos (which were taken years ago and have been shown hundreds of times since) on display during seemingly every bump in and out of commercial? Said photos appear to have been taken in springtime, which makes them seem way out of place now when much of the country is under a deep freeze. Again, that’s an easy fix if anyone is paying attention. Exhibit B: During the headlines segment on Monday, Mika does a reader on another man who tried to enter the White House grounds and was arrested. The photo of the White House, however, appears to be taken in the middle of July, with leaves on the trees, plush green grass and a bright sunny day. It’s a small error, but one that wouldn’t happen if the network president makes an unpleasant call to the control room once in awhile.

And when the show does try something new, things get awkward. Take the 8:00 a.m. set for example, which has Mika, Joe and Willie sitting on stools about five inches from each other. Everyone looks uncomfortable (particularly Joe, who is too tall for the stool), which means the viewer will feel the same way. The interview segments–also on stools–is like Happy Hour without a table to sit at or alcohol served.

– Lack of quality/big guests: The show created a buzz–particularly with power people in DC–mostly because of the guests it used to draw. Big names–particularly from the GOP side–don’t seem as compelled to join the show now. Even big name Democrats aren’t coming on as often. Maybe that changes as 2016 comes more into focus, but for now, it’s not the place to be it used to be.

MoJo has lost its mojo. Complacency and aversion to change appear to be the culprits. And when two of your co-hosts are earning a combined $6 million annually, you would think management would feel compelled to act. But as we’ve seen at MSNBC lately, it’s a lather, rinse, repeat philosophy.