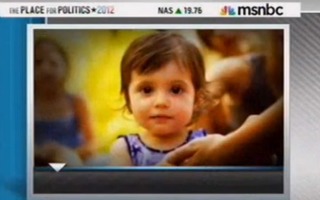 New York Times reporter Jeremy Peters struck a nerve over the weekend when he published a report critical of new ads from pro-Republican Super PACs that feature babies. “Attack ads have come to this: President [Barack] Obama makes babies cry,” wrote Peters. The meme that Republican PACs have crossed some imagined boundaries by utilizing images of infants in their campaign ads proved too provocative for the left-leaning cable news network, MSNBC, to ignore. On Monday morning, they featured two segments slamming the PACs for using babies.

Babies are one of the oldest props in politics and advertising, whether they are being kissed at campaign rallies or swaddled in fresh linens in a commercial for laundry detergent. And, of course, a little girl starred in the grandfather of all attack ads, President Lyndon B. Johnson’s 1964 “Daisy” commercial.

But this year babies have surfaced in ads designed to help Republicans chip away at the overwhelming support the president enjoys among women.

Peters noted that these ads are “almost always produced by teams of ad men, not ad women.” He quotes Linda Kaplan Thaler, a veteran of the Al Gore, Bill Bradley and Hillary Clinton campaigns, who said she found the ads to be beyond the pale.

“Scare tactics are nothing new, but with babies? This goes to new extremes,” Kaplan Thaler told Peters. “And when you are in a situation where you are telling voters something and not inviting a real conversation, you run the risk of voters having their own conversation.”

“People know they’re in a hole,” said Mr. Castellanos, the Republican advertising consultant. “What they want is to know that there is light at the end of the tunnel. They don’t want you to throw the baby in the tunnel.”

Unsurprisingly, MSNBC jumped on the opportunity to criticize Republicans for doing what politicians have done since Demosthenes. MSNBC anchor Thomas Roberts invited Kaplan Thaler on his program to talk about how off-base and atonal the messaging was behind the baby ads.

Roberts noted in passing that the Obama campaign is also running ads featuring babies. That did not inspire the kind of unequivocal condemnation that the pro-Republican ads engendered in the Democratic consultant Kaplan Thaler…  In fact, her employment history could, at least partially, explain her muted reaction? … Nah.

About 30 minutes later, Alex Wagner’s panel on the MSNBC program NOW featured a segment similarly critical of the baby ads.

“It really works with babies,” Winstead replied to uproarious guffaws from her fellow panelists. She went on to say that women would not be receptive to ads featuring babies because they believe that women should have access to birth control and somehow Mitt Romney aims to curtail that access.

Never mind that the women Winstead does not believe will be receptive to this ad have already forgone their access to birth control at least once – perhaps she thinks that he ordeal of caring for an infant is enough to refocus the mind of a young mother on the importance of access to contraception.

“This is counterintuitive for getting women, I think,” Winstead concluded, because why would a young mother care about her child’s financial future tomorrow when there are abortion rights issues on the table today?

The MSNBC panel agreed that these ads were intended to target women voters, a segment of the electorate that Romney has “forfeited” in their estimation over the course of the last four weeks. “Welcome to America, baby,” Wagner said mockingly. “You’re teething and have $50,000 in debt.”

Like most misapprehensions and appeals to conventional wisdom, the simplistic belief that women care for nothing beyond their access to contraception results from having failed to do the requisite homework. When women are asked to rate candidates on things other than what are traditionally considered “women’s issues,” women are often more concerned with the state of the economy and debt than their Republican-leaning male counterparts.

In the latest bipartisan Fox News poll, 33 percent of women said that the government wastes or misspends “more than fifty percent” of revenue compared with 29 percent of men. When asked if a potential terror attack or the growing national debt was a bigger concern to them, 53 to 29 percent of women answered the debt. Women are split, 44 to 44 percent, on whether the president’s stimulus helped the economy by adding jobs or hurt it by increasing the debt.

Finally, by 64 to 27 percent, all voters (including men, women, Republicans and Democrats, across every income bracket and demographic) believe the news media has been more focused on trivialities than on serious policy issues. Given the recent focus of the news media on the increasing frequency of babies appearing in Republican ads, one would have to assume that voters are probably more informed than cable news programs give them credit for.