Obama Channels Bush in Powerful Defense of Interventionism to U.N. 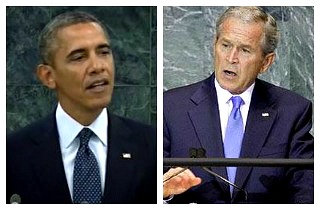 On Tuesday, President Barack Obama addressed the United Nations General Assembly. His speech included a forceful defense of the policies he campaigned on rejecting when he first ran for national office. Obama’s words were surely not what the world’s malefactors or his liberal supporters wanted to hear.

In his address, Obama touched on a variety of controversial aspects of his administration’s foreign policy; his liberal use of drones to prosecute the global war on terror, his administration’s approach to the Syrian crisis, and how his White House has handled a rapidly nuclearizing Iran. But the most impassioned notes of Obama’s address were hit when he defended the interventionism that has become a cornerstone of his foreign policy doctrine.

First, in defense of his administration’s decision to intervene in the nascent Libyan civil war in 2011 and his onetime embrace of a military solution to the ongoing Syrian crisis, Obama sternly asserted that he will not hesitate to enforce “American principles” abroad.

“Although we will be wary of efforts to impose democracy through military force, and although we will at times be accused of hypocrisy and inconsistency, we will be engaged in the region for the long haul,” Obama said. “For the hard work of forging freedom and democracy is the task of a generation.”

Those accusing the U.S. of “hypocrisy and inconsistency” do not exclusively reside abroad. In 2008, Obama’s denunciations of President George W. Bush’s embrace of “unilateral” interventionism in defense of American interests attracted many supporters weary of America’s perennial policing of global hotspots.

“The United States has a hard-earned humility when it comes to our ability to determine events inside other countries,” Obama continued. “You know, the notion of American empire may be useful propaganda, but it isn’t borne out by America’s current policy or by public opinion.”

And it never was. There has never been an American empire in the universally understood sense of the word “empire,” though progressive internationalists and global communitarians have enterprisingly expanded the definition of “empire” to include mutually beneficial trade relationships. It is today, and was yesterday and the day before, a propaganda tool utilized by those nations and individual actors with an interest in reestablishing the defunct system of spheres of influence.

It is good to hear Obama forcefully and persuasively defend America’s place in the world as the lone state able to project power globally and ensure the maintenance of the current global order (An order characterized by peace and stability among the great powers and largely unimpeded international commerce).

The greatest threat to this greatly beneficial order, Obama said, would be American disengagement from the world. “I believe America must remain engaged for our own security, but I also believe the world is better for it,” the president said. Engagement in this case does not refer to multilateral summits or diplomatic overtures to recalcitrant autocrats.

Later in his address, the president forcefully explained the limits of sovereignty in a statement that, just five years ago, could have been easily mistaken as having come from the mouth of a Bush administration official. Indeed, it is one of the central tenets of the resurrected ideology of “neo-conservatism.”

“We live in a world of imperfect choices,” he said. “Different nations will not agree on the need for action in every instance, and the principle of sovereignty is at the center of our international order. But sovereignty cannot be a shield for tyrants to commit wanton murder or an excuse for the international community to turn a blind eye.”

The President of the United States placing limits on the protections that sovereignty affords other nations surely caused a few U.N. attendees to shift uncomfortably in their seats. For Obama’s liberal internationalist supporters, this sentiment is equally troublesome. But this revelation is, however, apparently how an American president inevitably comes to understand the United States’ role in the world.

Liberal interventionism is Obama’s foreign policy doctrine. That doctrine is not dramatically divergent from that of former Secretary of State Hillary Clinton. The majority of Republican officeholders still appear willing to support a selectively interventionist American foreign policy. But it is not the policy preferred by most Americans. The politically popular sentiment in the United States is one that embraces disengagement and retrenchment. Obama has yet to give a forceful speech to the American people singing the praises of a robust American foreign policy as he did on Tuesday to the delegates attending the United Nations General Assembly. He would be wise to do so.

Factions within the Democratic and Republican Parties which reject America’s role as the globe’s only super power are on the ascendancy. It is easy to envision a time when their political supremacy is absolute and the United States withdraws from the world even as the stitching which keeps the peaceful global order together begins to fray.

That said, Obama’s address to the United Nations was a good start. It was as firm a rejection of the isolationist voices coming to the forefront in American politics, just as it was of a slightly more naïve Obama who ran for and won the office of the presidency in 2008.