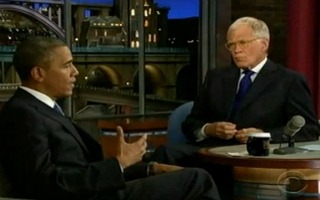 While the much of the political media is busy parsing the statements made by Mitt Romney four months ago at a closed-door fundraiser and engaging in a bit of amateur psychoanalysis in order to divine the GOP nominee’s true feelings towards Americans who pay no income tax, the actually President of the United States dismissed another large group of voters in a similarly brazen way. While appearing on a late night talk show, President Barack Obama displayed a contemptuous lack of concern for the significant number of Americans who care about runaway federal spending by saying that he was simply unaware of the record amount of federal debt.

During the president’s appearance on CBS’ Late Show with David Letterman on Tuesday night, Obama was asked about the debt clock prominently featured at the Republican National Convention. America’s national debt exceeded $16 trillion that week – more than the nation’s GDP. Letterman asked if Obama knew the nation’s debt.

“I don’t remember what the number was precisely,” Obama replied.

Of course, one must retain quite a lot of information in order to be the president. It’s a stretch, however, to believe that Obama is unaware of a figure that features prominently in Republican messaging and is the primary reason why Moody’s credit rating agency is likely to issue a U.S. credit downgrade in the near future.

For all the media’s apoplectic garment rending in the the last three weeks over one or another supposed gaffe or misstatement from Mitt Romney, only the Washington Posts’ media critic Erik Wemple seems to think that this is a rather glaring dismissal of a chief concern for many America’s voters.

President Obama promised to address the nation’s debt during his 2008 campaign. He lobbied for a line-item veto in the last election cycle – a power the Republican House granted him in February, 2012, but stalled in the Democratic Senate. Just after taking office, in February 2009, the president promised to cut “the deficit we inherited by half.” It has remained static over the course of his term at $1.3 trillion. The debt has grown from $10.6 trillion in 2009 to more than $16 trillion in Obama’s first term.

Those that dismiss these broken promises as distractions from the real issues Americans care about are not reading the polls. Debt and deficit consistently rank among Americans’ top concerns, just behind the issues of unemployment and the state of the economy (which many polls lump together as linked issues).

What’s more, the president clearly avoided saying how much debt America is saddled with because it is among his biggest weaknesses. Voters’ are aware he increased the debt greatly, as show in the results of the latest NBC/Wall Street Journal poll. This survey asked what their biggest concerns were about the president and the number one issue was that he has “significantly increased federal spending.” 29 percent of all voters said as much, including 44 percent of Republicans and 15 percent of Democrats agreed. Those numbers outpace Romney’s most troubling issue: contraception and abortion rights. Only 22 percent of all voters said Romney’s positions on those issues was a matter of concern for them.

A watchdog media would not let the president get away with this moment of selective amnesia. Call me an optimist, but I am holding out hope that the political press will step up and highlight this moment of conspicuous dereliction.