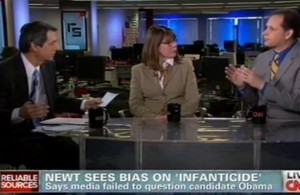 Since former House Speaker Newt Gingrich made the claim, at last week’s GOP debate, that “Barack Obama voted in favor of legalizing infanticide,” that clip of Gingrich has been played dozens of times by news outlets, but most did so to illustrate the Speaker’s tendency to manipulate debates by attacking the media, not to challenge Gingrich’s lie. On Sunday’s Reliable Sources, host Howard Kurtz briefly examined the topic.

Speaker Gingrich was referring to the Born Alive Infant Protection Act, which Barack Obama voted against as an Illinois state senator. Several fact-checking websites have compiled extensive research on the subject of these votes, and while there are legitimate areas of debate to be had on the subject, the facts surrounding Gingrich’s claim are clear: “infanticide” was already illegal when this act was introduced, it was still illegal after every time it was voted down, and it remained illegal when the bill passed in 2005. The illegality of infanticide was never in question.

Gingrich was using the “infanticide” lie to try and avoid CNN moderator John King‘s question about contraception, a question that was submitted by a CNN viewer, one which the audience booed, and one which King almost immediately began apologizing for. “Since birth control is the latest hot topic, which candidate believes in birth control, and if not, why? As you can see — it’s a — it’s a very popular question in the audience, as we can see. Look, we’re not going to spend a ton of time on this but it is — please.”

Gingrich reframed the question as a matter of religious freedom, then added “But I just want to point out, you did not once in the 2008 campaign, not once did anybody in the elite media ask why Barack Obama voted in favor of legalizing infanticide.”

Perhaps this is asking too much of an already back-on-his-heels John King, but isn’t this the point at which most reasonable people would say, “Wait, what? You’re accusing the President of the United States of attempting to legalize infanticide? On what basis?”

That didn’t happen, but even more shockingly, it also didn’t happen during the dozens of segments on other news outlets that played the clip. Now, to give credit where credit is due, CNN actually did take a stab at fact-checking Gingrich’s claim the next day (much as they did with Michele Bachmann‘s dangerously false claims about the HPV vaccine), but the vast majority of these segments were devoted to other issues, like Gingrich’s effective strategy of bullying debate moderators, or the level of nastiness in political campaigns, or my favorite misplaced priority, the one that Kurtz focused on.

The good news is that, in this segment from CNN’s Reliable Sources, Kurtz tries to factually refute Gingrich’s claim. The bad news is, he’s refuting the claim that nobody in the mainstream media asked then-Sen. Obama about “legalizing infanticide,” not the infanticide claim itself:

Now, you could make the argument that there just wasn’t enough time to go into a detailed examination of the issue, but having repeated Gingrich’s accusation, it’s hard to understand why Kurtz wouldn’t at least have let then-Sen. Obama’s response to David Brody play for a few more seconds. That’s where he explains that infanticide was already illegal, and that he opposed the measure because he viewed it as a stealth personhood law.

I don’t want to seem like I’m picking on Howard Kurtz here, because as I’ve said, he’s not alone in misplacing his priorities on this one. The website FactCheck.org also glossed over Gingrich’s “infanticide” lie to examine whether the media had ignored the issue in 2008. They concluded, as Kurtz seems to, that “the issue was hardly ignored by the mainstream media.”

I’m going to go ahead and agree with Newt Gingrich on this narrow point, though. A segment on the Christian Broadcasting Network (even if it was picked up by CNN), some newspaper articles from The Washington Post and The Oregonian, and an article by some AOL News reporter do not constitute any kind of meaningful mainstream coverage. Instead of being defensive, though, the media ought to say “Yeah, we did ignore it, because it was crap.”