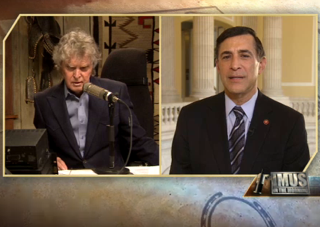 As the August 2nd deadline for America to pay its bills approaches, the possibility of the nation defaulting on its debt looms ever nearer, with Republicans appearing further than ever from compromise. This morning on Imus, House Investigations leader Rep. Darrell Issa explained the frustrations in his party– Democrats appeared unwilling to agree to short-term cuts, and long-term promises, he argued, “are just crap.”

Host Don Imus opened by noting that he was entirely skeptical of the idea that Congress was negotiating on anything at all in earnest, telling him “I always think you guys are jerking our chain, anyway,” and admitting to not really paying attention to anything the Congressman was saying throughout the interview, which added to the conversation the charm of feeling entirely disposable. Rep. Issa made his points anyway, comparing the talks to something “like a garbage strike in New York” (Imus had compared them to doorman strikes) and explaining the frustration facing Republicans in the talks.

“He [President Obama] signed a funding through September months ago… the truth is, we don’t have to have an August 2 deadline,” he argued. He noted that “the question here was… are we serious about cutting spending this year?” Aside from that question, Rep. Issa argued, “there’s all kinds of pejoratives, but it’s just crap– it’s absolute crap to think that promises over ten years mean anything.”

Imus’ response to this was some sort of non sequitur insult to Sen. John Kerry for calling him “The I-Man” on his show, “which made him sound like an idiot.” Again, Imus made a concerted effort to give whatever Rep. Issa was saying the minimum amount of respect, confessing, “the rest of what you said, I wasn’t paying that much attention.” He then shifted gears somewhat to the theory being tossed around in certain circles– notably some circles on Fox Business— that “Moody’s was in cahoots with Obama” to downgrade the nation. Rep. Issa didn’t seem to pay too much mind to the conspiracy theory. “You can find a conspiracy theory before or after 10 AM in Washington any day of the week,” he noted, adding that America should be downgraded if it can’t keep up with its debts. “If America can, in fact, pay it’s bills, it’s AAA, and if we can’t pay our bills, it doesn’t matter what rating they give us,” he concluded.

Imus returns to the bizarre side plot that is “how members of Congress should address Don Imus” before asking about the current investigation under Rep. Issa’s purview, the “fast and furious” case, which gave Imus an opening to note that he though Iran-Contra was a “great idea.”