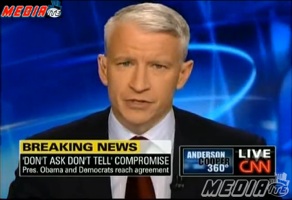 Last night word leaked from a Senate aide that a compromise had been reached between President Obama and Congressional Democrats that would allow gays to serve openly in the military. Dana Bash reported on CNN last night that while Senate Democrats are aggressively pushing for legislation this week, Defense Secretary Robert Gates wants time for the Pentagon to review.

The White House has received pretty strong criticism from the left and Gay activists for what was seen as inaction on the controversial policy of banning openly gay members of the US Armed forces. This compromise would hasten legislation, but run counter to Gates’ plan of taking time to research, review, and possibly build consensus among Pentagon apparatchiks. Gates has publicly stated his desire to repeal the policy, but appears to have a different method than White House staffers and the Congress with whom they are dealing.

This would comport with a request made recently by Defense Secretary Robert Gates, who favors the repeal, that any scrapping of the 1990’s-era law wait for a full review going on now at DOD on implementation. That review is expected to wrap up in December.

The three, according to Levin, have outlined their position in a letter to the Pentagon. “It authorizes DOD to repeal,” Levin said, but he would offer no more detail, as the negotiations are sensitive.

This will play out on the House floor later this week, when Murphy offers an amendment to the annual defense spending blueprint bill known as the Defense Authorization. The measure is opposed by the House Armed Services Committee Chairman, Ike Skelton, D-MO, who is facing a difficult re-election back home.

In the Senate, the measure will be debated and voted on in the Armed Services Committee later this week in closed session.

It is unclear how the vote will go in that committee, though the senior Senate Democratic source said, “We are optimistic, now that there is a compromise agreed to by DOD.”

Most committee Republicans are expected to oppose the measure, including war veteran Sen. John McCain, R-AZ. Sen. John Cornyn, R-TX, a committee member, told Fox earlier this year, after the President proposed a repeal in his State of the Union address, “At a time when we’re putting our men and women through long deployments, it’s really not a good idea to engage in social engineering in the military.”