Sarah Palin Surprises The Folks At The Five, Greg Gutfeld Quizzes Her About Red Eye
video

Sarah Palin Surprises The Folks At The Five, Greg Gutfeld Quizzes Her About Red Eye 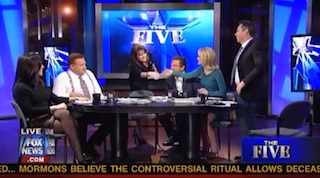 Today towards the end of The Five, Dana Perino announced that they wouldn’t be doing the planned segment on Jeremy Lin because there was a surprise guest in the studio that even the hosts weren’t aware of. Suddenly, in strides none other than Sarah Palin much to the glee of everyone involved (a positively giddy Eric Bolling made sure to tell the producers that he “loved them”). However, while those on camera might have been psyched, this viewer was pretty bummed. Come on, The Five, would it have hurt you so much to ask the former Governor what she thinks of Linsanity?

Palin was eagerly welcomed to the rarefied group of Five guests (joining Karl Rove and fellow notable not-a-candidate Donald Trump). She was there to tease an interview that she did with Eric Bolling that will be airing tonight on Follow the Money. God, that guy’s got a lot of producers to show his love to today.

Palin discussed a number of topics, notably Red Eye, saying that she took a while to understand the show. This was obviously a comment that Greg Gutfeld wasn’t going to let go unclarified. She explained that she could never quite figure out what the audience was for a show on at that hour. However, she said that she had always remembered a comment he had made on Red Eye a while ago in which he claimed that Palin would never appear on it because it would ruin her chances of running for president. Palin admitted that she still considers going on just to prove him wrong. Which reminds me; Sarah Palin would totally never write a guest post for Mediaite because it would ruin her chances of running for president. Am I right?

Watch all of Sarah Palin’s appearance from Fox News below: