Why is The Media Still Asking if President Donald Trump is Racist? 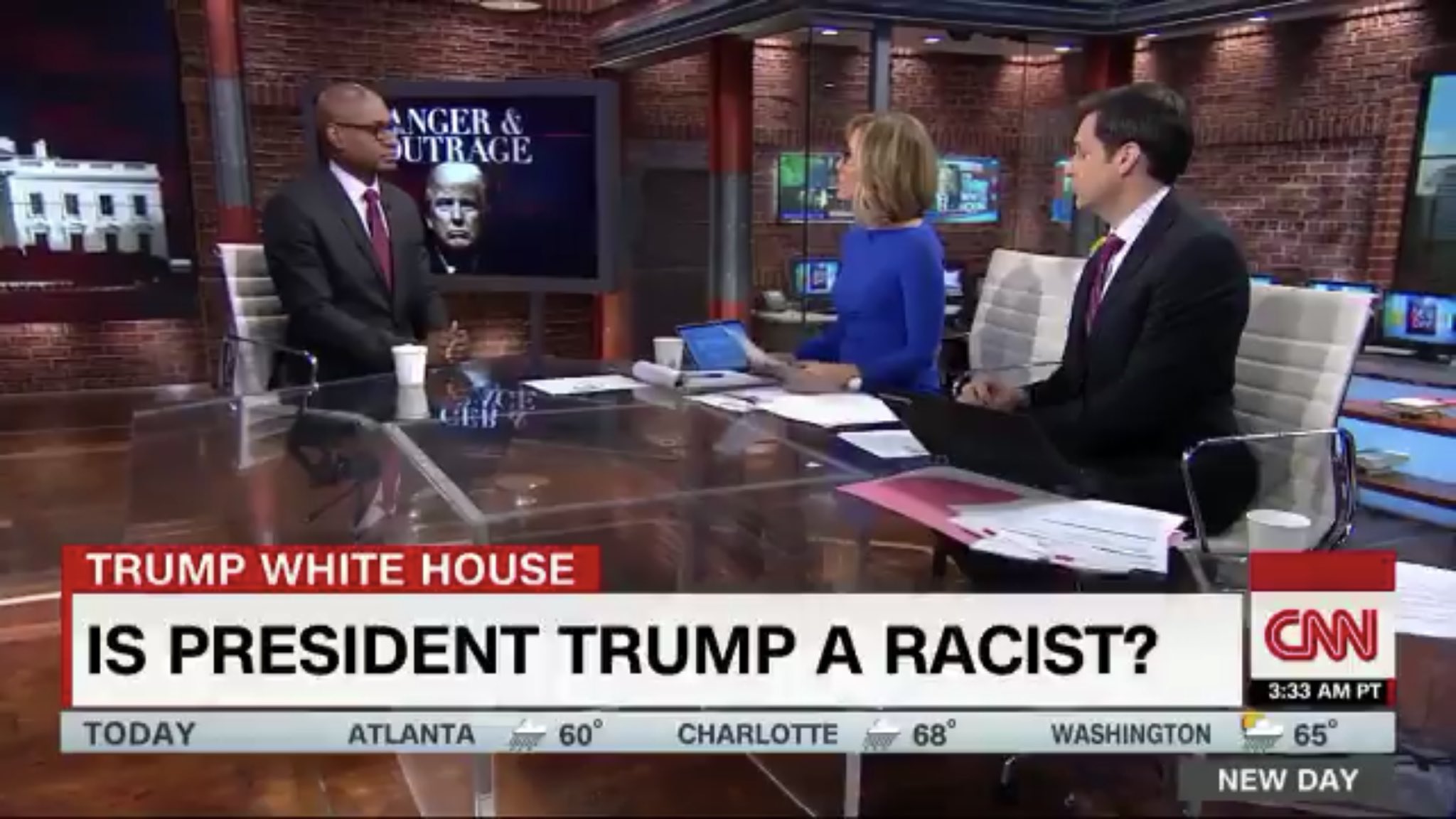 Watching the initial coverage from the three big networks on Thursday night in the wake of President Donald Trump’s latest reported comments was, in full honesty, a bit nauseating.

For as many justifiable reactions to the president’s comments about Haiti, El Salvador and Africa as there were Thursday night — somehow — chyrons pondering “Is President Trump a Racist?” were still popping up on networks. While the meat of those segments with this heading largely suggested that he in fact is racist, any chyron reading that should have lasted about five-seconds. Yes, Trump is not only very much a racist (as Don Lemon went on to forcefully point to Friday night) but he is a powerful avatar for racists in this country and has been since he began his campaign.

Usually, hesitation from the media in terms of negative branding a public official like this is courteous and warranted. Scarlet lettering notable figures should never be seen as virtuous or the goal of these moments. The question is though — when do labels like these cease being considered matters of perception? When there are so many provable instances of an accusation, at what occurrence does it stop being up for discussion how the media should label a person or their behavior?

To not acknowledge the inherent racism of Trumpism is perhaps the peak of intellectual dishonesty in a period that is defined by it. His 2016 run was borne out of his involvement with the Birther movement and the official start of his campaign decried the “rapists” Mexico itself was “sending” over the border. From there, his entire candidacy and subsequent presidency rested on a mutually-dependent relationship with the alt-right. The president’s latest reported words (ironically made long after Steve Bannon’s White House departure,) should be the coup de grâce to the media’s hesitation.

As it is for most clear-minded people already, it ought to be fine for the media to openly acknowledge racism as a defining Trumpist trait. Like Trump and his administration’s dishonesty — which the media is also struggling to counter — these are realities that must be confronted. If the media keeps tip-toeing (or completely dancing) around the role that racism has played and continues to play in Trumpism, it will only further normalize such feelings — and insult the intelligence of audiences.

To be fair, the question of “Is President Trump a racist?” is not up for debate with most in the media after Thursday night. Even some of the Trump administration’s most dedicated apologists at Fox News’ had difficulty justifying his comments, notably Brian Kilmeade from Fox and Friends. One person who had no such trouble, however, is up-and-coming mental gymnast Jesse Watters.

Watters, who is becoming increasingly known for the logic backflips he’s willing to do to repackage the words of the president as acceptable, reached a new low in attempting to justify the reported comments. Not only did he seem to agree with the sentiment expressed by Trump when he described multiple countries as “shitholes” and exclaimed “Why do we need more Haitians? Take them out.” But he also declared that those ideas were channeled from the “forgotten men and women” of America.

“I think it’s either fake news or if it’s true, this is how the forgotten men and women in America talk at the bar,” Watters stated on The Five.

“Is it a little offensive? Of course. But you know what? This doesn’t move the needle at all. This is how Trump is. He doesn’t care. He shoots from the hip. And if he offends some people, fine. There’s so many more offensive things happening the world. ISIS beheading people. There’s crime in the inner-city. There are people getting kicked off welfare.”

Frankly, the idea of Trump and by-proxy Watters as the ‘Forgotten Man Whisperer’ is wonderfully comical. Picture this scene — Watters and Trump crossing the bridge into West Palm Beach to go to a dive bar and talk to the ‘common man’. I’m very interested to hear more of Watters’ imaginary all-American barroom conversations. At what point does Lynyrd Skynyrd’s ‘Free Bird’ come up?

All parody aside, Watters in his current role as Trump’s servile interpreter is more like a modern country songwriter whose dumbed-down lyrics reflect a quiet stereotyping of his own listeners. By choosing the line of defense that he did for Trump’s comments about immigrants from El Salvador, Haiti and Africa, Jesse Watters — the textbook definition of an upperclassman from the Northeast — did his own version of “the southern man loves trucks and Budweiser” refrain.

For whatever clowns there are in America who do willfully live out the stereotype that Watters tried to spin, they are not even close to a representative of everyday ‘forgotten’ Americans. Whether or not the ideas expressed were socially valid and non-controversial in terms their of acceptance with the ‘common man’ (spoiler alert: they’re not,) that doesn’t make it okay for them to be normalized within the office of the presidency. If conservatives in the media really do detest “all racism” and cherish the idea of ‘American Exceptionalism’, why won’t they acknowledge these facts and the historically exceptional nature of the presidency?

Perhaps, this is because for too long the media at large has been overly willing to give President Trump and his surrogates the benefit of the doubt on race issues when absolutely none is deserved.