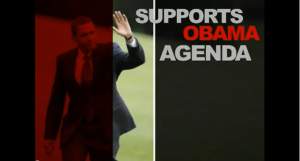 NPR’s Ari Shapiro reports that increasingly, GOP candidates are mentioning President Obama in their ads—using his name as a weapon against both Democratic and Republican opponents.

In 2008, Shapiro explains, when Obama’s approval ratings were sky high, “virtually every Democrat included Obama in campaign materials.” Obama’s star shined so brightly that even a few Republican candidates tried to tie themselves to the eventual president: Oregon Senator Gordon Smith, for example, boasted that Obama had praised him for “lead[ing] the fight for better gas mileage and a cleaner environment.”

Now, though, the country is so deeply divided—and Obama’s approval ratings have slipped so significantly—that when Democrats allude to the President in their ads at all, they generally do so in order to distance themselves from his policies.

Republicans, however, make frequent mention of Obama, using him as a stand-in for everything they believe to be wrong with Washington today. They cite his name in order to vilify Republican adversaries as well as Democratic rivals.

In the ad below, for example, Delaware’s Christine O’Donnell slams her (ultimately vanquished) primary opponent Michael Castle by saying that he “support[s] the Obama agenda.” Republican Roy Blunt, who’s running for the Senate in Missouri, attacks Democrat Robin Carnahan with similar words: “Robin Carnahan will say anything to hide her record rubber-stamping the Obama agenda.” A photo of Carnahan with her arm around Obama appears onscreen as those words are uttered.

While this strategy is nothing new—during the 2006 midterm elections, George W. Bush was so unpopular that Democratic candidates invoked his name in a similar way—Obama’s ubiquity in GOP ads is notable. According to Shapiro, the trouble here for Democrats is that while Republicans can use the president’s name to conjure a wealth of negative associations, Democrats don’t have an equivalent “high-profile villain” to mention in their ads.

Obama himself has been trying to rectify that, says Shapiro, by painting House Minority Leader John Boehner as a bad guy. Unfortunately for the President, “it’s a hard sell when many Americans have never heard of Boehner.”