Limbaugh: ‘No Question That [Racial Tensions In Trayvon Case] Is Coming From The White House’
video

Limbaugh: ‘No Question That [Racial Tensions In Trayvon Case] Is Coming From The White House’ 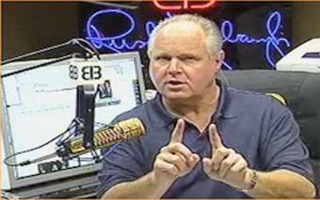 On Monday, Rush Limbaugh blamed the Obama administration for the increasing racial tensions surrounding the Trayvon Martin shooting death case. He said that “there is no question that this is coming from the White House” and administration officials could “cool this down” if they wanted.

RELATED: Rush Limbaugh: If There Is A War On Women, Obama Is The Generalissimo

Limbaugh took a call from a listener named Steve who asked, “do you think it’s possible for this racial divide for the Trayvon thing originating from the White House?”

“What Obama said was, ‘if I had a son, he’d look like Trayvon.’ And everybody said ‘so?’ But that was widely viewed as stoking it,” said Limbaugh. “Then yesterday – did you hear about this? Maybe it was this morning, but [Attorney General] Eric Holder actually praised Al Sharpton for his work in the Trayvon Martin… I kid you not.”

“Look, let me speak bluntly Steve,” Limbaugh cautioned. “There is no question that this is coming from the White House. There is no question that the White House wants this kind of chaos and unrest in the culture. They, for some reason, have determined that it is helpful for Obama’s reelection because they believe that they can tie all this to the existence of Republicans and conservatism.”

“If in the White House they wanted to cool this down, which they should do, they could do it,” said Limbaugh. “It’s a powder keg waiting to go off and nobody that I see is doing anything to make sure that powder keg doesn’t explode.”