White House On Biden ‘Terrorists’ Remark: ‘Product Of An Emotional Discussion,” But Inappropriate 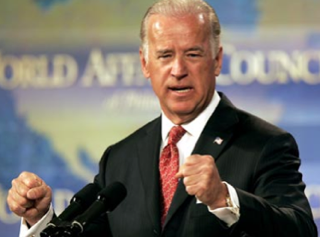 The White House is not conceding that Vice President Joe Biden likened the Tea Party to “terrorists” in a private discussion, as VP Biden himself has denied. But in today’s press briefing, Press Secretary Jay Carney was made to speak on the matter, and he made clear that the language was “not appropriate” for the discussion, heated though it may be: “The Vice President doesn’t think so; the President doesn’t think so.”

In today’s press briefing, the topic did come up, however, and Carney did not mince words about the use of the term “terrorists” out of context. He did, however, confirm that Vice President Biden “did not say those words” and the blame lay solely with Democratic Congresspeople who now “regret” using the term. Jake Tapper reports:

Carney said the use of the word “was a product of an emotional discussion, very passionately held positions in this debate, but that does not mean that it’s appropriate.  And it’s not.  The vice president doesn’t think so; the president doesn’t think so.  Any kind of comments like that are simply not conducive to the kind of political discourse that we hope to have.”

As it occurred in closed doors, and as it is unclear whether it occurred at all, it is safe for everyone involved to condemn the use of the term terrorists universally by those who hold public office. That media characters are, of course, a whole other story should likely be the headline here, because if the Vice President did use the term, he is neither the first nor last to do so– not to mention that, if he did, he at least had the sense not to do so with a platform onto which millions of Americans could hear it. But, hey, at least it detracts from what would have inevitably been the compulsory Biden Gaffe™ of the debt crisis: joking that Rep. Gabrielle Giffords is now a co-member of the “Cracked Head Club.”