Who Won the First Debate Between Joe Biden and Donald Trump?

What a Sh*t Show: Highs and (Mostly) Lows from the First Presidential Debate of 2020 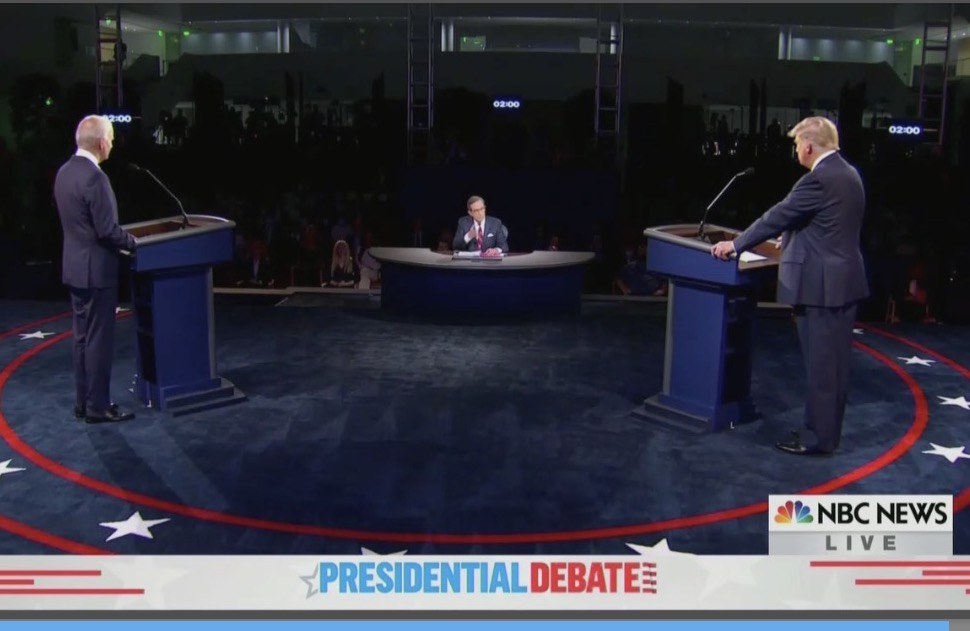 The first presidential debate of the 2020 general election just wrapped, and the accepted conventional wisdom says that there is no more significant event to help determine the next commander in chief. And if you happen to believe that the winner of this election will set the course of America’s future, then it’s not hyperbole to say that tonight’s debate was a really, REALLY big deal.

The challenger, former Vice President Joe Biden, currently has a not-so-insignificant lead in the polls, though the electoral college is much closer. Incumbent Donald Trump was in a similar position in 2016 and made a stunning comeback to win the election nearly four years ago.

The pre-debate narratives were neatly set. Could President Trump effectively explain his administration’s handling of the coronavirus pandemic, which has led to over 200,000 American death, which is 20% of global deaths despite representing only 4% of the worldwide population? And how will the commander-in-chief handle a recent bombshell New York Times report on what many see as a severe tax dodge based on uncovered personal tax returns?

At the other podium, Joe Biden has been painted by the Trump campaign and surrogates as a gaffe master who may have lost a step or two in older age. Would the former Vice President present a lucid and energetic visage, or look more like a sundowning “Sleepy Joe” as Trump derisively refers to him.

Right off the bat, there were fireworks, focused primarily on health care and preexisting conditions. President Trump started on the front foot, so much so that some may say rudely and repeatedly interrupting both Biden and the moderator Chris Wallace. In the first ten minutes, Wallace chided the president while Trump shot back at the Fox News anchor, “I guess I’m debating you, not him.”

Opening Bell Chaos — It would be charitable to call the first 10-15 minutes an unintelligible mess, mainly because President Trump repeatedly spoke over Biden and Wallace. Running roughshod over a moderator and fellow candidate may be considered a successful debate tactic in some quarters, but for anyone looking for some semblance of a Socratic discussion on topics and the political platforms of the day? It was a colossal failure.

As the debate turned to a more sober topic, the coronavirus pandemic, things settled down a bit. Though Biden’s shots at Trump were no different than anything, we’ve heard from the Biden camp or his surrogates. And Trump’s talking points were remarkably familiar to what we’ve seen promoted during coronavirus task force briefings and Trump political rallies.

Trump turned to his insult comic routine by telling Biden, “don’t ever use the word smart with me” and alleging that the former vice president could not even recall the name of the university he attended. For his part, Biden seemed to try to laugh off his super-aggressive political rival, but not effectively. Biden’s efforts to laugh off Trump’s constant interjections did nothing to curtail them. A bit more direct conflict would likely have served him well against the strong man routine.

Biden Traps Trump — Biden’s first real body blow was his effective reeling Trump into defending his antimaskism, which Trump tried to pivot to the size of his rallies. While Trump was on his heels, Biden failed to deliver a real knock out while discussing masks and political rallies by failing to mention the tragic passing of Herman Cain, the Trump surrogate who attended the fateful Tulsa rally then promptly succumbed to Covid-19.

Off the Rails — Chris Wallace repeatedly tried to keep this runaway train on the tracks and failed more often than he succeeded. In his defense, there isn’t much one can do if one of the participants doesn’t abide by a simple social contract of allowing one’s political rival to get his fair time. Future debates, if they happen, might need a mute button to cut candidate’s mics to keep them from interrupting and allowing something of meaningful conversations.

Eventually, Ukraine, Burisma, and Hunter Biden came up in the course of the debate, which elicited more of the same high-volume nonsense comprised of rude interruptions and not-so-funny smiles and smirks. The best part to emerge from that portion, however, was Chris Wallace chiding both candidates (but primarily focused on Trump) for the constant interrupting that had rendered the debate mostly a trainwreck.

‘Stand Back and Stand By’ — Perhaps the most compelling part of the debate was a back and forth over “law and order,” Antifa and White Supremacists. While most of the back and forth was predictable, Biden scored his best punch when he cited Trump administrations’ own FBI Director Christopher Wray who said Antifa was an ideology and not an organization while labeled white supremacist a domestic terror threat. When asked to denounce White Supremacists and Proud Boys, Trump refrained from a clear denunciation and instead said “stand back and stand by.” That’s far from a condemnation.

Contrasting Styles — The biggest difference between the two candidates’ approaches? Biden aimed mostly to look at the camera and address Americans. Whether that was effective or not remains a question to be discussed another day. Trump was instead laser-focused on Biden and chose to interject or reply to everything Biden said.

This difference in tone was in greatest contrast when Biden emotionally bragged about this deceased son Beau Biden who served honorably in Iraq and died a few years from cancer. Trump took that opportunity to not console his opponent, but instead bring up Hunter and his alleged cocaine habit claiming he was dishonorably discharged from the military, to which Biden simply exclaimed “that’s not true.”

Two-thirds of the way through the debate, it would not surprise if most Americans turned off their television and privately went to their bedrooms to weep. And could easily see “suburban moms” being really freaked out by the debate, in a manner that probably doesn’t suit the current administration. And the polls will likely remain largely unchained as a result of this debate.