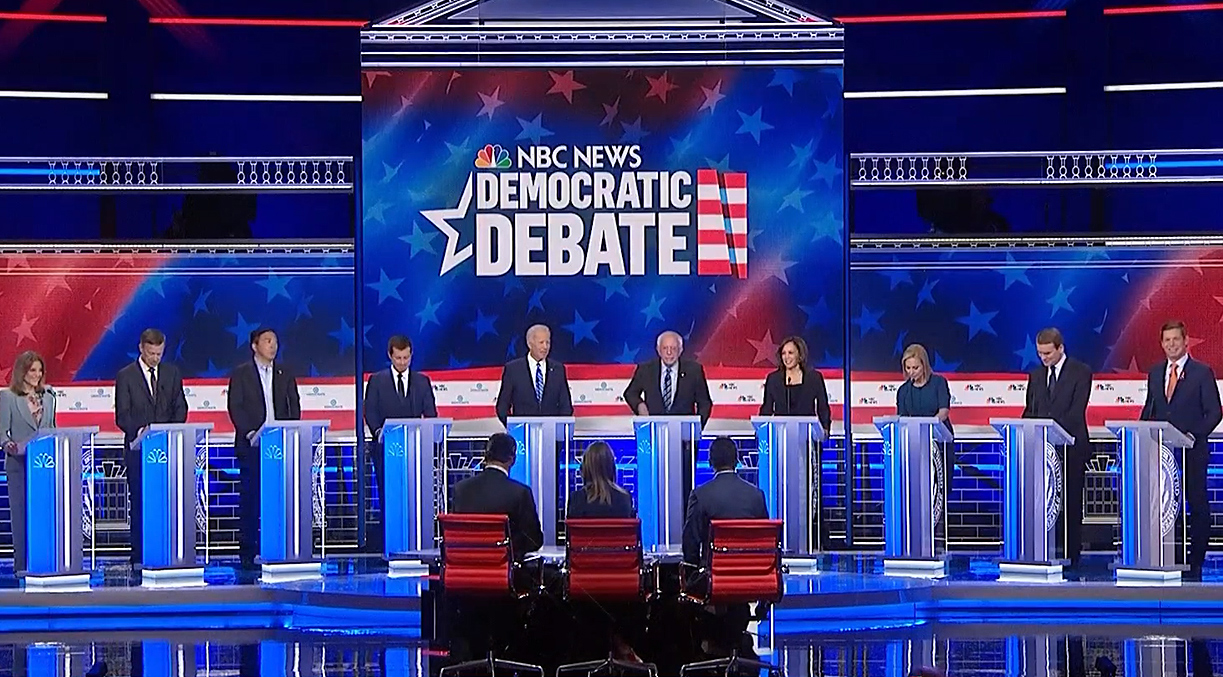 For two hours on Thursday, the second half of a two-night Democratic debate took place in Miami, and it was a crowded and sometimes chaotic scene. The second night had three of the four top polling candidates, and the folks who aren’t in the top went for broke.

THE BIGGEST WINNER:
Senator Kamala Harris was dominating the positive reactions throughout the evening, both on social media and in up to the minute coverage on political websites. She completely manhandled former VP Biden, she was the one who called for calm amid the disastrous chaos that marked a lot of the air time (see below), and had some of the best takeaway lines. It was a command performance. It would be a shock if anyone else were scored the winner after her dominant evening.

The Other Winners:
Part one of the Democratic Debate came out ahead tonight. On the first night, technical glitches and the new format didn’t go over well. And although the network was a partial winner simply for having the first debate, it was arguably a loser performance by the network. Or so we thought, until the chaos of night two took over and made night one look positively well-oiled in comparison. Among the two nights, the microphone issues of day one were less taxing, and less frustrating, than the bickering and interruptions of night two.

Another winner, in a sense, was the base of Democratic voters, who actually got to see some real differences between the leading candidates. Unlike in most debates, this one featured some front-runners who genuinely could bring indecision in primary voters. Close competitors with close visions for the future of the party that might have been hard to differentiate. In some ways, not all positive ways, the differences between the candidates became more stark. Something that may be reflected in polling in the next few days.

THE LOSERS
THE BIGGEST LOSER:
Everyone. The cross-talk, the fighting, the bickering, the interrupting … call it what you want, even chaos, but it was not compelling. In fact it was irritating and viewers said so on Twitter, a lot. The lack of control — and we mean by the moderators as well as self-control from the candidates — was off-putting and a big fail. One can blame the quantity of people, but only if one forgets that there were just as many people on the first night and this didn’t happen. Not a good look for anyone, or a good time for the people watching.

The Other Losers:
Sen. Kirsten Gillibrand: did not have a good night. She was frustrated, she fought with everyone to get in a word edgewise, and she came off like the person causing a lot of the chaos. It was, without question, a poor performance.

Former vice President Joe Biden should have had a command performance. But he was not only broken by Harris, he simply didn’t deliver overall. He had to ask the moderators to repeat the question, he didn’t take the upper hand in any of the fighting, he just didn’t come out swinging. Which he needed to do. With Eric Swalwell, otherwise unremarkable in the debate, constantly harping on Biden’s age and repeating “pass the torch,” the, forgive us, “low energy” from Biden was not a win.

Mayor Pete Buttigieg, like Biden, did not get the job done. He not only didn’t shine, the pall over him regarding the events in his hometown over racial tensions and the police was noticeable. When Eric Swalwell, otherwise unremarkable in the debate, landed a blow saying Buttigieg should fire his police chief, he basically lost the whole night.

Check out all our coverage for clips, videos, and analysis, including post-debate reactions, from night two of the Democratic Debates on CNN