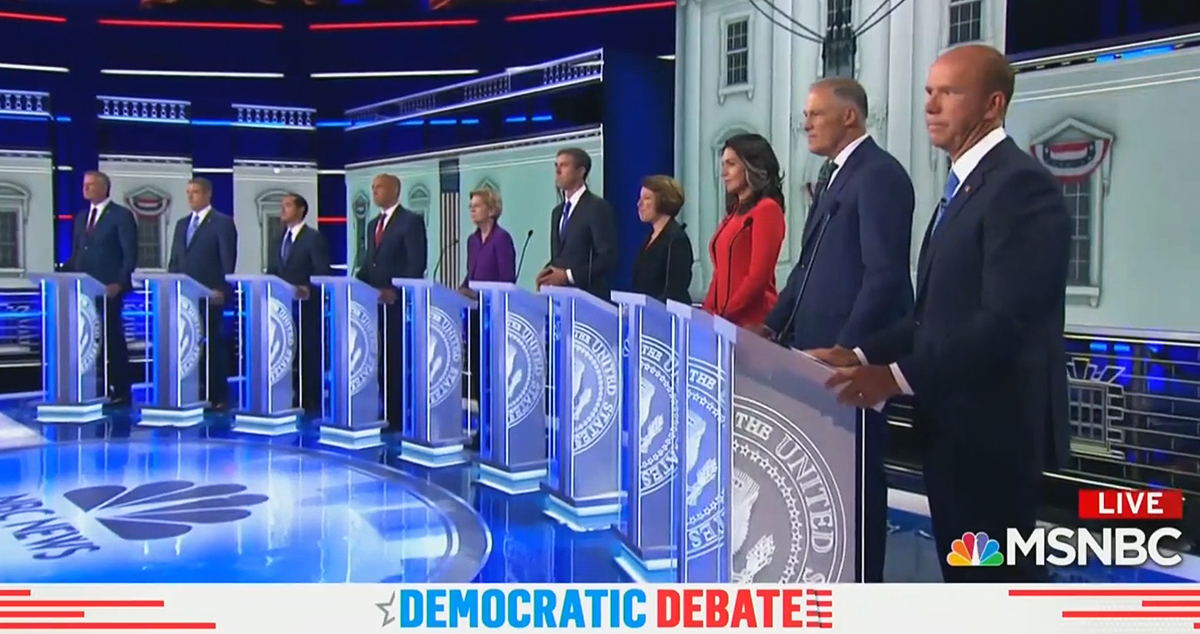 For two hours on Wednesday, the first half of a two night Democratic debate took place with a crowded stage that nevertheless featured only half of the Democrats running who qualified to participate.

It may seem a tough decision to pick a small set of winners and losers from the debate, much less one big winner and one big loser, but the long time on stage and the wildly varying degrees of preparedness made some of the decisions pretty easy.

THE BIGGEST WINNER:
Senator Elizabeth Warren had the most to gain without much to lose. She seems an obvious front-runner, and has been at the top of the pack in polling, but hasn’t quite separated herself out as the wheat among the chaff. At least, not before tonight. Warren was ready for prime time. She seemed prepared. She sounded expert. She handled the other candidates with ease. She seemed serious, and like she meant what she was saying. It was a solid performance, but more than that it was a reminder of why she was an early favorite for 2020. Having been lost somewhat in the shuffle of a thousand people running, Warren got some much-needed attention back on her campaign. Especially compared to less prepared folks like Tulsi Gabbard and Beto O’Rourke. (see below.)

The Other Winners:
Lester Holt: Just like in his normal anchor role, Holt’s natural authoritative air, flawless delivery and timing, and general ability to command the moment without stealing it was a definite win. You can tell, in other words, who is network and who is cable.

Rachel Maddow: On the other hand, Maddow comes from the cable news division, not to mention the opinion side, and wasn’t a shoo-in for moderator. Nevertheless, she came off professional and invested, and in comparison to Chuck Todd, far more genuine. A big win for the host who came in with points against her.

Julian Castro: After getting the better of Beto in an exchange, Julian Castro spiked on Google trends. You can’t say it much better than the tweet.

Google Trends: Julian Castro has spiked +2,400% in search since the #DemDebate started.

He also seemed to have a good grasp of the details, which wasn’t the case for all the contestants.

The Show of Hands: The show of hands on healthcare came off as win on one point and a loss on another. It made a moment, a photo op, that will stick around. But as you’ll see in the losers section, there is a downside.

MSNBC’s half win: NBC’s show of hands moment was a win and a loss, and it contributed to the result for MSNBC overall. But rather than a win and loss, MSNBC gets a half win, half loss. There were many gaffes and odd format choices (see below), but in knocking Fox’s block off (see below) regarding debates, if not ratings, the network elevated its mark on the election. Should a Democrat win in 2020, that will make seem more like a win than the half-win they get for this half-debate.

THE LOSERS
THE BIGGEST LOSER:

Of the “big” names on stage, former Congressman Beto O’Rourke had the most to gain or lose, needing desperately to get back some of the steam he had when he first joined the race. He did not. O’Rourke was nervous. He swallowed too much. He was intimidated when challenged. And his early tactic of speaking Spanish to answer a tax question came off as pandering, eliciting side-eye even from the man on stage with arguably the most dramatic flair, Cory Booker.

Fox News: Everybody is going to realize that nobody misses them. The debate over a Fox News debate is pretty much over, there’s no reason to revisit it anymore.

Microphones: When Chuck Todd and Rachel Maddow took over for the second hour (a format choice that counted against MSNBC as a winner), the subsequent microphone circus was a total loser, and while Maddow had a smooth and relaxed reaction, it led to a rather irritating performance from…

Chuck Todd: Todd just isn’t stellar as a debate moderator. He’s far too sure of himself as a part of the process and not as a one guiding the candidates to real answers. In comparison to the much more graceful and sincere performance by Maddow, he looked even worse.

Tulsi Gabbard: She never recovered from her early “deer in the headlights” moment when she almost forgot her line and stared desperately into the camera as if willing it to be a teleprompter. And when her official Twitter went into battling the refs over supposed favoritism it looked bad. She might have held her own on some questions, but she did not come off as a leader in the group.

The Show of Hands: yes, it was a winner. it was also a loser. Because these gimmicky moments are a trade-off. You will definitely create the buzz, the photo, and the sound bites, but you look a little desperate doing it.

MSNBC’s half loss: The microphone thing was a disaster. The fights Chuck Todd had with the candidates, was chaotic and off-putting, his fault or not. Not to mention Todd’s lackluster performance overall. They get a half win for even having this crazy 300 person debate, but under normal circumstances, the sense of collapse that built as the night wore on would be a total loss.