Andrew Breitbart On Hannity: ‘I Could Care Less About Shirley Sherrod’ 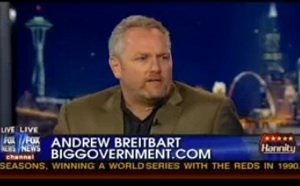 Last night Andrew Breitbart continued his media tour, explaining the Shirley Sherrod tape that he published earlier this week, with an appearance on the politically friendly Hannity. According to Breitbart, the controversy surrounding the alleged racist comments by the once (and future?) USDA employee at an NAACP event is “not about Shirley Sherrod.” Rather, the tape exists because the NAACP has alleged racism within the Tea Party movement, and in Breitbart’s words “for them to talk about racism they should not be throwing stones in glass houses.”

First, some background: On Monday, Breitbart released a video that showed a portion of (now former) USDA official Shirley Sherrod’s speech at a March 27 speech at an NAACP banquet, which Breitbart described as “video evidence of racism coming from a federal appointee and NAACP award recipient and in another clip from the same event a perfect rationalization for why the Tea Party needs to exist.”

The NAACP and the Obama Administration apparently agreed: Sherrod’s words were denounced by the former shortly after the video became public and the USDA accepted her resignation Monday night (though Agriculture Secretary Tom Vilsack is reported to be reconsidering her dismissal.) The NAACP, who had previously called for her resignation citing a “zero-tolerance” for racist comments, has not renounced that call, claiming to have been “snookered by Breitbart and Fox News.”

Since the story initially broke, a number of events have occurred that that have added color to the black and white story, as it was originally reported. Not only has the family of the white farmer come forward in a tremendous show of support for Sherrod, but the entire video of her speech has since been released by the NAACP, and when viewed in its entirety, one can clearly see that Sherrod’s speech was truly about tolerance, a broadening sensibility, and redemption (view the entire speech here).

What, then, was the motivation behind Breitbart releasing the portion of the tape that paints Sherrod (and the NAACP) in a negative light? Apparently, it is simply retribution to the NAACP’s alleging that the Tea Party is tolerant of racism within its ranks. Or in Breitbart’s own words, he had told NAACP head Ben Jealous “you want to divide this country on race? You want to keep negatively branding the Tea Party constantly asking are they racist? That is an act of sending a message negative branding to the American people and to lack people these are people to be feared. It is a technique of propaganda.”

So the release of a small portion of the Sherrod speech isn’t about her, it’s “about tarring the American people in the Tea Party movement with the false charge of racism,” according to Breitbart. Or in other words, it is a technique of propaganda. Ironic, given that he has also claimed something about glass houses and trowing stones with regards to the NAACP’s claim of racism, but appears to be playing the same exact game, though in this instance, more effectively.

A rough transcript of the exchange follows the video below.

Hannity: Why don’t we start at the beginning. how did you get in contact with this video and the posting?

Breitbart: An individual in Georgia worried about being exposed and attacked like Joe the Plumber reached out to me. Now I figured out where the email was in early April of this year to tell me about this video. It was something that I thought was somewhat news worthy that didn’t pursue. But when I saw that the NAACP last week was going to reassert the provable falsehood that the n-word was hurled by Tea Party people as part of a resolution to condemn the Tea Party. The Tea Party federation sent a letter to the Black Caucus saying they want to investigate they do not want to talk about the exculpatory evidence shows that the n-word did not happen. I told Ben Jealous, you want to divide this country on race? You want to keep negatively branding the Tea Party constantly asking are they racist? Are they racist? That is an act of sending a message negative branding to the American people and to lack people these are people to be feared. It is a technique of propaganda.

Hannity: Hang on. I want get some facts on the table. I want your opinion and everything else associated with it. You have had this tape since April?

Breitbart: I didn’t have the tape, I had recognitions that it existed and the man told me about it. He tried to send me and it came on a disc and it didn’t show up. I said this is annoying. So when the NAACP thing happened, I found his number, I called him and he sent me to — me two excerpts of the video.

Hannity: The allegation of the left — hang on a second, she said she harbored these views in this tape. She described how she racially discriminated against the white farmer. Shes not disputing that.

Breitbart: She sees the white man as your kind.

Hannity: She decides he will get help from one of his own kind and referred him to a white lawyer. She also said on the tape admits she didn’t do everything she could for him because he’s white. What critics are saying is that was edited. She is claiming that was edited she left out the part she learned from this at the end of the tape.

Breitbart: The reason why Shirley Sherrod is the story not the NAACP because the White House which stands by the forced resignation, harassment as she said, they made the story about Shirley. They threw her under the bus. I have not asked she get fired. I’ve not asked for an investigation. The whole point was to show for the NAACP to spend five days on national TV saying the Tea Party is racist, without any evidence, when we can prove that the central ment didn’t happen and the mainstream media won’t play it for them to talk about racism they should not be throwing stones in glass houses. What this video shows and what the NAACP affirms, in their official rebuke is not just that Shirley Sherrod, what she said was wrong that the audience was laughing and applauding as she described how she maltreated the white farmer.

Hannity: Before she gets to the end of the story which she is claiming puts context.

Breitbart: Did the people in the audience know there was going to be a point of redemption?

Breitbart: The point is the NAACP at a dinner honoring the person is cheering on a person describing a white person as the other is far worse than anything that has ever been alleged against the tea party certainly not proved.

Hannity: The history of you and this tea party and this allegation of racism, offered $100,000 pocket if there were any tapes that would prove racial epithets were hurled at African-American congressmen and women, correct?

Breitbart: Yes. but enough about me. I’m going to get to the heart of the issue. Mary Francis Berry the former chair of the U.S. Commission on civil rights appointed by President Carter and Clinton, this is not a conservative, okay. This is what she said that has to do with what is going on now and why this is not about Shirley and Andrew and why this is about the NAACP and the congressional black caucus and the Democratic party. Tainting the Tea Party movement with the charge of racism is proving to be effective strategy for Democrats. There’s no evidence that the Tea Party is any more racist than other Republicans and indeed many other Americans. But getting them to spend their time purging the ranks and having candidates distance themselves should help the Democrats November, having one’s opponent rebut charges of racism is better than discussing joblessness this is about politics. This is about tarring the American people in the Tea Party movement with the false charge of racism.

Hannity: good to see you. plenty more hannity coming up.