Bloomberg View Launches With Warning To Democrats: Don’t Underestimate The Republicans In 2012 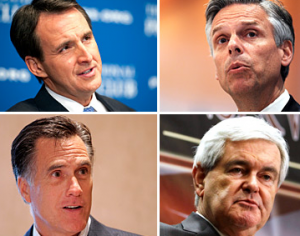 Bloomberg View, the just-launched opinion page of Bloomberg News, debuts with a column by Ramesh Ponnuru, arguing that it’s a mistake to underestimate the Republican field for 2012: “The 2012 presidential race has barely begun, but it is already time to retire one of its cliches: the much-repeated claim that ‘the Republican field is weak.’ Liberals say it with a smirk, because they think it will guarantee President Barack Obama’s re-election. Conservatives say it while begging someone else to enter the race and rescue them.”

Ponnuru, a senior editor at National Review, argues that the top three contenders all have the stature and the experience to win:

The Republican field isn’t weak. The three people most likely to win the Republican nomination — Mitt Romney, Tim Pawlenty and Jon Huntsman, according to Intrade.com — have all been governors. Two of them were governors of states that Obama carried in 2008. By contrast, the top three candidates for the Democratic nomination last time around (Obama, Hillary Clinton and John Edwards) had a combined zero days of executive experience. This time, even some long-shot Republican candidates have stronger resumes than that: Libertarian gadfly Gary Johnson, for example, was a two-term governor of New Mexico.

Ponnuru says the “weak” charge comes from a kind of psychological issue among the out-of-power party, forced to field a candidate to go up against the President of the United States (with all the trappings of power) and who dream of a finding a “perfect candidate”:

Dissatisfaction with the Republican candidates is also a matter of psychology. Republicans may not like, and some of them may not even respect, the incumbent president. They nonetheless see him sitting in the Oval Office and commanding troops. They see their own candidates, by contrast, sharing a stage with a bunch of other people, some of them fringe figures. They seem small. They will keep seeming small until some of them start winning primaries and one of them wins the nomination.

Offstage, Republicans imagine, is the perfect candidate. He has to be offstage because nobody onstage is perfect. He also has to be offstage because not running is part of his perfection. If he ran, he would be another guy competing for microphone time at the debates. The other candidates would suddenly have an incentive to draw attention to his flaws.