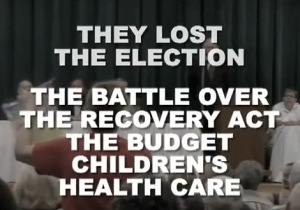 The Democratic National Committee released a web ad Tuesday that seems to have hit a “Marathon Man”-style nerve with conservatives online. Entitled “Enough of the Mob,” the ad features clips of recent disruptions at health care town hall meetings, including a “Birther” with what looks like a large wonton wrapper in a Ziploc bag.

The ad has sparked a wave of anger and defiance from conservatives online, who collected their grievances under the hashtag “I am the mob.” The common refrain is that the ad amounts to demonization of dissent, similar to 2007’s “Moveon.org Resolution”, and fearmongering, similar to conservative attempts to convince people that the reform bill mandates euthanasia.

The media, meanwhile, continues to debate the authenticity of these protests as grassroots movement vs. special

Mary Katherine Ham, however, has broken one of the spokes in the DNC’s ad. She reports at The Weekly Standard that the Right Principles “playbook” featured in the ad doesn’t actually spring from “high-level Republican political operatives” at all:

Right Principles has a Facebook group with 23 members and a Twitter account with five followers. MacGuffie describes himself as an “opponent of leftist thinking in America,” and told me he’s “never pulled a lever” for a Republican or Democrat on a federal level. Yet this Connecticut libertarian’s influence over a national, orchestrated Republican health-care push-back is strong, indeed, if you listen to liberal pundits and the Democratic National Committee, who have crafted a nefarious web out of refutable evidence.

It would be hard to characterize these folks as high-level, even in today’s Republican Party.

Ham goes on to deconstruct the route between Think Progress’ story, MSNBC’s reporting of it, and the DNC ad.

This is a great example of the pitfalls of taking shortcuts. The DNC would have been better served by laying out the funding sources of healthcare reform opposition, a difficult concept to fit into a 2-second graphic.

As for attacking the protesters themselves, the wisdom is questionable. The White House has avoided this so far, drawing a line between the protesters and the special interests behind them. The risk is that ordinary Americans will identify with the protesters, and see this as bullying.

On the other hand, the anger of the right at this ad might play right into the DNC’s hands, making opposition to healthcare reform seem unattractive.

A less risky, but tough to fit into 60 seconds, strategy might be to engage the protesters. Keith Olbermann reported last night on just such an example, a town hall meeting by Texas Democrat Gene Green that seemed to go pretty well. Given a fair hearing, it’s tough to relate to the fact that almost all of them have adequate healthcare, yet they oppose extending it to those who don’t.

In any case, it’s obvious that what the healthcare debate needs is less fearmongering, and more factmongering.