F-Bomb Round-Up: How The Media Quoted The Unquotable, Joe Biden 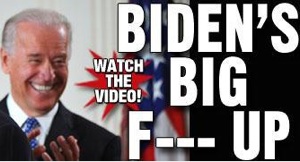 Joe Biden just handed the media an easy comic relief story (and a great trademark Joe Biden gaffe), but with the great power to entertain also comes the great responsibility not to offend. So how did the mainstream media chose to report the story without using Biden’s off-color adjective for the health care bill law? We went with the poignant euphemism “f-bomb;” for all you psycholinguistics majors out there, here’s what the rest of the media did.

And while you were reading, here’s how the cable news channels handled the affair on television: