How Long Until The Media Starts Debating Haiti ‘The Money Pit’?
video

How Long Until The Media Starts Debating Haiti ‘The Money Pit’? 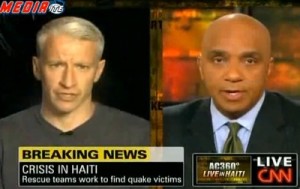 Get ready. This is the sort of storyline we can probably expect to see emerging in the next few weeks. Since Tuesday’s earthquake in Haiti a number of media folks on the right have been taken to task for questioning how much financial help the U.S. should be dolling out to Haiti, a “corruption” ravaged country that has that prior to this week had very little infrastructure, and now basically has none (things are so dire that U.S. airplanes bearing aid had to be turned away yesterday because the airport in Port-au-Prince was unable to handle any more traffic). It’s not, of course, a question of Americans’ generosity (it never is), but it will likely soon become a question of where the money is going and how much of it the country is willing to spend in a recession.

It is that recession spending that Obama is likely going to have to address once the dust begins to settle in Haiti (media reporting wise…by all accounts it will likely be decades before the country is able to recover from this). You can see the questions beginning already in places other than FOX and talk radio. Last night CNN interrupted Anderson Cooper’s on-the-ground reporting from Haiti to discuss Haiti “the money pit” and how “years of corruption” had resulted in this week’s devastation, and “how virtually there has been no Haitian response.” This however, is likely to be the focal point going forward: “Since 1960 the U.S has spent a lot of money about $5 billion” which has basically been an “abject failure.”

CNN accurately points out this is in part because the U.S. was handing it to the dictators we were propping up instead of giving it to the people who needed it. I imagine that fact may get lost in the weeks ahead, however. What probably isn’t going to get lost in the cable chatter to come is how much money a financially-strapped U.S. government should be handing over to a nation that has been unable to run itself, and whether the country is ready for a whole other kind of nation building. A preview below: