In ‘One Of His Last Interviews,’ Alec Baldwin Says He Was ‘Born To Spit On’ Rupert Murdoch, Fox News

In ‘One Of His Last Interviews,’ Alec Baldwin Says He Was ‘Born To Spit On’ Rupert Murdoch, Fox News 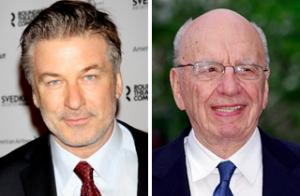 It looks like Alec Baldwin is more interested in interviewing others than being interviewed himself. The actor, who NBC is eyeing to replace Carson Daly in their late night line-up, tells The Hollywood Reporter that his latest sit-down could be “one of the last interviews I ever do.”

Baldwin, who is currently starring on Broadway in the play Orphans, spoke to The Hollywood Reporter‘s Marisa Guthrie about a host of issues that have come to define his career, from his outspoken liberal political views to his combative relationship with the paparazzi. But he saved his strongest words for News Corp. chairman Rupert Murdoch.

“Page Six is kind of a stiletto for a rabidly conservative political operation,” Baldwin said of Murdoch’s New York Post gossip section. You know, Fox News, Rupert Murdoch — killing people of a certain stripe, that’s their goal. And I just happen to be the recipient of an abundance of that.” He added that if he was a “conservative Republican” he probably would not find himself to be a target in the same way. Asked whether he consciously tries to avoid controversy, Baldwin said, “It depends. On any given day, I have other things to do, typically. But every now and then, spitting on Murdoch, Fox News, the New York Post and Page Six. … I feel like I was born to do that.”

In reference to his brother Stephen Baldwin, who is a conservative, Baldwin said, “His politics have no relevance in my life whatsoever. I don’t say that, by the way, in a mean-spirited way or a reductive way.” He added, “Ultraconservatism is, to me, so illogical. Everywhere you go, conservatives want to cut, cut, cut, cut — cut money for powerless people. So that’s the biggest problem I have with them.”

Baldwin also weighed in on the current late night shakeup at NBC, without directly referencing whether he would be joining the team there. “Everybody’s time is up,” he said. “You know what I mean? The last time this went on, it became such a third rail for NBC. They’re so tense about it.” He added that he thinks Jimmy Fallon‘s “going to be the greatest talk-show host, along with David Letterman and Johnny Carson, ever.”

Asked specifically if he would host a talk show of his own, Baldwin answered, “It depends on the format and who it was for and what the schedule was like. Those guys that do talk shows have that terrible condition where they have to pretend everybody’s special. I don’t know if I could do that.”

The most cryptic part of Baldwin’s interview came at the end when he indicated his desire to move away from the spotlight and controversy altogether, not something a new talk show host would typically do. “Now that I have my daughter coming and my wife,” he said, “I just want to get as far away from that as possible. You’re probably going to be one of the last interviews I ever do.”