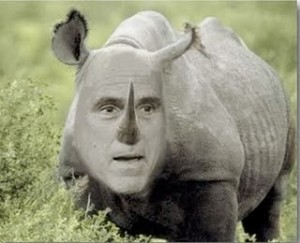 Dana Loesch, CNN contributor and editor-in-chief of Big Journalism, has been sharpening her Tea Party cred against a Mitt Romney grindstone, bashing the candidate as an “unrepentant RINO (Republican In Name Only)” whom she “was against” in the last election, and this election. So great is her animus for Romney that she gets entire “mailbags of hate” from his supporters. The only problem is, Loesch voted for Romney in 2008, and the internet has the proof. This is the Tea Party equivalent of being in a mosh pit, and having a Justin Bieber CD fall out of your pocket.

To understand just how much Loesch trades on her Mitt-bashing, check out this clip of her “Mailbag of Hate: Mitt Romney Edition.” Listen to the end, though, because whatever you think of Dana Loesch, she does an Elmo impersonation that would fool Big Bird (which also happens to be the name of a defunct Breitbart site that pushed back against scientific consensus among ornithologists):

Man, it’s too bad Sesame Street is on PBS, Loesch could have a hell of a side-job there.

Loesch’s main problem with Romney, if her twitter feed is any indication, is Romney’s individual health care mandate. I don’t know, am I reading these right?

I didn’t protest socialized health care for three years to support the guy who wrote it before Obama. #romney

I was against Romney last election, I’m against him this election. I will be against him so long as he’s an unrepentant RINO.

Team Loesch went to the polls this morning and cast two votes for Mitt Romney. I think he’s the best candidate of change and more qualified than McCain. Rush just has personal beef with McCain and Coulter, well, she’s Coulter.

Loesch doesn’t say anything about holding her nose while pulling that lever, but to be fair, the post’s title, “Tuesday Isn’t THAT Super,” can be seen as an indication that she wasn’t crazy about Romney or McCain. Still, why choose Romney over McCain when the thing you don’t like about the Democrats is this:

Even though I don’t like John McCain for several reasons, one of which includes McCain-Feingold, another is his hostility to small business and the free market – he’s still a better choice to me than the two successfully underwhelming socialists the other side is offering with their tax-heavy universal healthcare which circumvents our liberties and makes us all wards of the state.

The funny thing is, while Loesch was casting that vote for Mitt Romney, Barack Obama was actually to the right of Romney (and primary opponent Hillary Clinton) on the issue of health care. One of the things I didn’t like about Obama’s primary platform was that he was against an individual health care mandate. You can’t do away with preexisting condition limitations without it. It’d be like taking the “buy one” out of a “buy one, get one free” deal.

Now, we all have our internet skeletons in the closet (like my early support for John Edwards), and it’s quite possible that Loesch was unaware of Romneycare at the time. He certainly wasn’t running on Romneycare. If that’s the case, though, then why go to the trouble of deleting the post from the blog’s archive? Surely, Loesch’s current Tea Party crowd would understand, wouldn’t they?

Update: Since posting this story, BreitbartTV editor Larry O’Connor has taken issue with the headline, and Dana Loesch has responded, although she says she hadn’t actually read my post before responding to it. In any case, after hearing her response, it appears that I missed something significant in the original story.

Let me handle Larry’s objection first, which is with the headline “Internet Busts Dana Loesch For Voting For ‘Unrepentant RINO’ Mitt Romney In 2008,” specifically, with the word “busts.” The headline is intended to convey that Loesch, who now says she was “against” Mitt Romney in 2008, wrote a blog post in 2008 (in which she says she voted for Mitt Romney and expressed support for him), which was later deleted from the blog’s archive. This contradiction, however, was caught through the use of the “Internet Wayback Machine.” The “Internet Busts” construct is a self-evident metaphor, since the internet is neither sentient, nor possessed of authority of any kind.

Larry also thought I was accusing Dana Loesch of hypocrisy, which couldn’t be further from the truth. Yes, there was a contradiction, but I never implied it was anything but an honest one. I even acknowledged that the post’s title, “Tuesday Isn’t THAT Super,” could be seen as an indication that she wasn’t crazy about Romney or McCain, and that it was possible she just didn’t know about Romneycare back then. Not everyone follows state politics. I sure couldn’t tell you a thing about Utah’s health care laws.

Dana Loesch, in her response, explains that she wasn’t for Romney in 2008, she just opposed John McCain more strongly, and cast her vote for Romney to prevent McCain from securing the nomination. After her first choice, Fred Thompson, dropped out, Loesch says “We were, at that point, faced between choosing Mitt Romney or John McCain. I did not like Mitt Romney.”

Now, you would never know that from her blog post, a fair reading of which would lead you to conclude that she at least liked Mitt a little. “I think he’s the best candidate of change,” she said. A fair person would acknowledge that, based on that post, no one would conclude that she was “against” Romney in 2008. A cynical person might think Loesch was just trying to backstop an embarrassing contradiction.

However, in her response, Loesch says that there are podcasts from the period that demonstrate her dislike for Romney. Fair enough. She goes on to explain her thought process. “I weighed Romneycare against McCain-Feingold, and that’s ultimately what made my decision. I disliked both of them to the point where I almost wanted to choke. And I ultimately decided that McCain-Feingold, in that particular instance, was worse.”

Again, she doesn’t mention Romneycare at all in her post, and she clearly states that the Democratic challengers’ stance on health care was much worse than anything McCain did. “He’s still a better choice to me than the two successfully underwhelming socialists the other side is offering with their tax-heavy universal healthcare which circumvents our liberties and makes us all wards of the state,” is how Loesch put it in February of 2008. That’s almost exactly how she describes Romneycare now. In my original post, I allowed that maybe she didn’t know about Romneycare then, but let’s take her at her word, here, that she did.

If all of this is true (which means that she was somewhat less than forthright with her blog’s readers in 2008), then I missed something glaring in my original post. If Dana Loesch’s true intent was to deny John McCain the Republican nomination, despite her opposition to Mitt Romney, she appears to have made a horrible, horrible mistake. See, not only was there no reason for Dana Loesch to hold her nose and vote for Mitt Romney in order to deny McCain victory, that action was actually instrumental in McCain’s nomination. John McCain won the Missouri primary, and the state’s 58 delegates, by a margin of 1%…over Mike Huckabee!

Yes, the same Mike Huckabee that Dana Loesch was scheduled to introduce at a St. Louis Tea Party event earlier this year. If only she had known about him in 2008! In a bit of cruel irony, she even, coincidentally, referenced the Tea Party-friendly former governor in that 2008 blog post, defiantly decrying big government with a folksy, “HUCK THAT.”

If just a tiny fraction of Missourians had voted for Huckabee, instead of Mitt Romney, the 2008 presidential race could have gone a whole different way. Going into Super Tuesday, Huckabee was within 67 delegates of the lead, with 1,069 up for grabs that day, and was polling in a statistical tie with McCain for the lead in Missouri. Had he won Missouri, he might have stayed in the race longer, raised more money, and really given McCain what for. He kept on winning states even after he dropped out, and even wound up with more delegates than Romney!

Update 2: At the January 30, 2008 Republican debate, Romney defended his individual mandate as a conservative idea, apparently in a persuasive manner:

With regards to my health care plan, let me describe what is the ultimate conservative approach. In this country, you have today about 47 million people that don’t have health insurance. We went out and tried to find out why they don’t. We found out that about half of them could afford to buy insurance if it were reasonably priced. They could afford to buy it, but they weren’t buying it. it? If we get sick, we can go to the hospital and get care for free.“ And we said: what? If somebody could afford insurance, they should either buy the insurance or pay their own way. They don’t have to buy insurance if they don’t want to, but pay their own way. But they shouldn’t be allowed to just show up at the hospital and say, somebody else should pay for me. So we said: No more free riders. It was like bringing “workfare” to welfare. We said: If you can afford insurance, then either have the insurance or get a health savings account. Pay your own way, but no more free ride. That was what the mandate did.

Dana Loesch, liveblogging the debate, ate Romney’s lunch, or something. Here’s what she had to say about Romney’s defense of the Romneycare individual mandate:

7:19 Is it just me or are they going after Romney tonight? I like Romney’s “pay your own way” approach to healthcare. Now the debate is starting to sound like an exercise in conservatism. First time all night.

Loesch is right, of course. Most liberals feel that Obamacare was a half-measure, watered down by Republicans, conserva-Dems, and would have preferred a public option, or Medicare for all. What we got was the equivalent of eliminating starvation by making it illegal not to buy food.