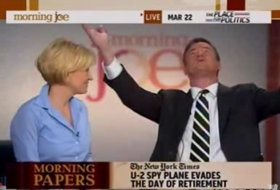 We already knew sometime around 10:30 last night that today’s episode of Morning Joe was going to be eventful, it was just a question of how. Joe Scarborough, who was never too keen on the health care bill, made hyperbolic Margaret Thatcher and Apolo Ohno references, but it was Tufts history professor Peniel Joseph‘s suggestion that passing the bill was on the same historic and moral level as the 1964 Civil Rights Act that finally made him snap.

MSNBC has no shortage of excitable pundits beaming about the House’s passage of the health care bill last night, and they are willing to make all sorts of preposterous comparisons (though Geraldo Rivera’s Lazarus and phoenix metaphors don’t lag far behind). Joseph’s overstatement of choice was comparing the bill to the Civil Rights Act, and noted that he believed “people see health care as a new civil rights movement.” Scarborough failed to see the similarity:

“…to compare what happened in Selma in 1965 with a bill as bad as this bill that makes money for insurance companies, that cuts deals with big pharma, the cornhusker kickback… how can you even draw a comparison with the Civil Rights Movement in 1965 and this hulking, slothful beast of a bill?”

Well, for one, Joseph argued that “there were critics to the right and left of those bills.” Both bills faced bipartisan opposition, unlike any other bills in history! Joseph got help elaborating his point from Lawrence O’Donnell, arguing that there was a moral equivalent between people of all races being able to eat at the same restaurants and children being able to afford health care instead of dying. He also challenged Scarborough’s personal congressional record, asking if Scarborough had ever spent more than three hours studying health care. This prompted a yell of “that is such crap!”, a rogue soy latte reference, a few Bill Clinton impressions, and more!