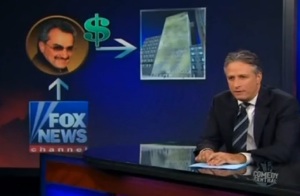 During a recent Fox and Friends segment surrounding the Islamic cultural center/mosque that is proposed for Lower Manhattan, guest analyst Dan Senor pointed out that Imam Rauf had previously received funds from a Saudi organization that is alleged to also “fund radical madrassas all over the world” and is headed up by Prince Al-Waleed bin Talal. Jon Stewart used that clip to then reveal that bin Talal just so happens to also be a large News Corp. business partner, or in his words, “The terror funder is Rupert Murdoch‘s News Corps’ funder!”

When future trumped up media controversies (like the Park 51 story) reveal themselves, the nation should first look to Jon Stewart for reason, context and common sense. No one has more clearly pointed out the many inherent absurdities in the alleged fake controversy surrounding the “Terror Mosque,” as Stewart chose to call it.

The crux of Stewart’s clip is best summed up by the following rough transcript of the central thesis:

That’s right – the guy they are paying as a sinister money force, owns part of Fox News. Let’s do as Fox News commands and follow the money:This is the proposed ‘terror mosque.’ We know that it’s a ‘terror mosque’ because the money may be coming from a bad guy, who definitely owns part of Fox News. Now we know he is a bad guy because we just heard it on Fox News. And by hearing it on Fox News watching Fox News, I’m increasing their viewership and their advertising rates go up. Now, part of that money goes to the bad guy we learned about on Fox, because he’s their part owner, Prince Al-Waleed bin Talal, allowing him then to make it rain, so to speak, on the terror mosque. My point is this: if we want to cut of funding to the terror mosque we must, together as a nation, stop watching Fox. It’s the only way. Using their reasoning, its the only way to cut off the revenue stream to these bad dudes.

Stewart then points out that the most curious part of this entire report was that Fox and Friends never revealed who the evil money source was to the viewers of the show. He brings on correspondents Wyatt Cenac (representing Team Evil) and John Oliver (representing Team Stupid) to debate whether or not, well, the producers at Fox and Friends were being evil, or just stupid.