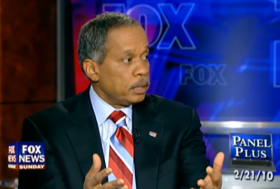 Juan Williams has absolutely no faith in the 2012 Republican presidential field. He brought a healthy dose of “fair and balanced” to the FOX News Sunday Panel Plus online-exclusive segment yesterday, where he predicted to his bemused colleagues that, despite their high hopes, if they didn’t find a respectable candidate soon, Barack Obama would win reelection in a landslide.

While the rest of the panel – Bill Kristol and Stephen Hayes of the Weekly Standard, NPR’s Mara Liasson, and host Chris Wallace – shrugged it off with laughter, it was a pretty fearless point to make riding on the heels of one of the most successful CPACs in recent memory and in a year where dissatisfaction with the Democratic Party has fed a massive Tea Party resistance movement and launched Republican Scott Brown from Massachusetts into the Senate.

Williams seemed to have been pushed into making this argument not by the successes of Sarah Palin or propositions that Mitt Romney still has a viable shot at the presidency, but at Kristol’s suggestion that Texas governor Rick Perry, who has advocated for Texas secession in the not-so-distant past, could make a splash in the presidential pool. While Romney and Mike Huckabee have the traditional advantage of being runners-up from 2008, Kristol argued, Perry’s decade in the governor’s seat would put him in a “pretty strong position to run for President.”

After some words from Hayes and Liasson, Williams came into the conversation and rained on their presidential parade:

“To quote Alan Greenspan, the level of exuberance here is irrational. When you’re talking seriously, you hear Bill Kristol talking about Rick Perry, who was talking about having Texas secede from the union a minute ago, that he’s a serious presidential candidate? When you hear discussions about Haley Barbour, who I think is a competent and smart guy, but he has tremendous baggage in terms of his reputation of being a Washington insider and lobbyist…It looks to me like a setup for an Obama landslide…it’s like there’s nobody out there, it’s like a wasteland.”

Of conspicuous absence in this conversation was Texas Congressman Ron Paul, who both fits into the Kristol/Wallace theory that the runners-up from the last election always get an advantage and can claim a major victory among conservatives, having won the 2010 CPAC presidential straw poll. Given his feelings for Perry, however, it may be safe to assume Williams doesn’t see Paul as much of a threat, either.