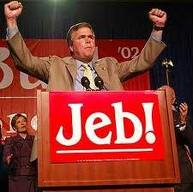 Speculation about the GOP’s 2012 nomination has been running rampant since, well…President Barack Obama‘s election. But only recently has a new name started getting attention: Jeb Bush. While much of the media devote endless attention to Sarah Palin, Mike Huckabee and Mitt Romney, Boston Globe columnist Joshua Green asks, “Why not Jeb Bush?“

Sure, most people might know him as Dubya’s brother, but Jeb Bush has had a political career of his own as governor of Florida. Green says the objection to him “begins and ends with his name”:

“If he weren’t a Bush, he’d be an obvious top choice,’’ said conservative activist Grover Norquist. Widely presumed by the political cognoscenti to one day follow his father and win the White House, Jeb instead watched as his brother did so first…

Green argues that Bush “could still win the nomination were he inclined to pursue it” because there aren’t any obvious front-runners at the moment. Basically, “each of the leading candidates is somehow flawed” — and here, he quite accurately points out what they are (for example, Mitt Romney’s abortion stance and health care legislation create a distrust in the GOP base, Romney’s money can’t solve that problem).

Bush, on the other hand is “known as an ideas guy.” In a recent MSNBC segment, the Huffington Post’s Sam Stein echoed that sentiment. He also noted that though Bush’s “watered down tone from the rest of the party on immigration” may not earn him point with the GOP base (and certainly not in Arizona), such a stance could prove valuable in terms of a general election.

Interestingly, Green says Bush’s greatest obstacle is himself. He’s kept a low profile and would have to make a name for himself, but he ultimately has to decide if that is in his interests. I couldn’t state it any better: “Of course, the surest way to defend the family name would be to defeat the president who got elected by impugning it.”

Watch the full MSNBC segment below: