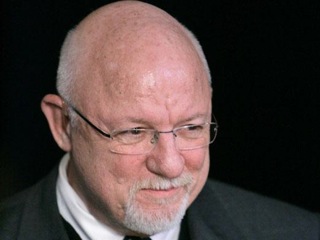 It’s an uphill battle for most 2012 Republican contenders, but no one has as big as monkey on their back as Rep. Michele Bachmann. The firebrand Congresswoman, de jure leader of the Tea Party, and conservative icon has the strongest resume and rhetorical skills of any woman in the running, and yet still can’t shake the spectre of Sarah Palin. And now her strategist Ed Rollins is under fire for employing the gravest of slurs against the polemical reality TV star: “not serious.”

Rep. Bachmann recently hired Rollins, who ran Mike Huckabee‘s 2008 campaign, to work her ground strategy. His first splash was to attack Sarah Palin on Fox and Friends’ Friend Brian Kilmeade‘s radio show, arguing that Palin “has not been serious” and “didn’t go to work,” which “Michele Bachmann and others who work hard” can’t possibly relate to. These comments come after Rollins made the same comparison to Politico and said that Rep. Bachmann was “so much more substantive,” and that “people are going to say, ‘I gotta make a choice and go with the intelligent woman who’s every bit as attractive.’”

Needless to say, the conservative blogosphere did not go over particularly well. Twitter went abuzz with calls for Rep. Bachmann to drop Rollins, citing “campaign consultant malpractice,” calling him a “clown.” Greta van Susteren, who emphasized that the comments were “not the worst,” still saw the strategy as unfortunate. Some international press is salivating at the potential of a “cat fight,” because politicians of the same sex taking jabs at each other is so uncommon. Men, obviously, never attack other men in the press.

But reaction to any sort of tension between Palin and Bachmann has highlighted in the former’s followers a blind faith that sparks the suspicion of many who would otherwise view Palin more favorable as much as it reveals the sexist underbelly of the political system. Yes, many view the potential conflict as particularly notable as a sort of “instinctual” reaction to the two running. Few would put the same amount of attention into Tim Pawlenty bashing Mitt Romney, or even more exciting folk like Herman Cain and Ron Paul taking stabs at each other. Given Rep. Bachmann’s record and Palin’s addiction to publicity stunts– not to mention the fact that both may be running for the same position against each other— a little tough talk is to be expected, not due to their anatomy but due to their backgrounds and careers. The only reason their female condition unites them is because the political sphere is still a place where genitalia supersedes ideology as an identity marker– a lamentable hurdle similar to that of ethnicity, which has been eroding at a far more rapid pace.

But we knew that before Rep. Bachmann’s people were at Sarah Palin’s throat. Far more timely is the latter revelation: how far Palin’s supporters will go in defending her. Like any populist, her followers don’t ascribe to any true ideology so much as to her cult of personality. That they would go after a true “maverick” like Rollins is proof of this.

For a conservative staple, Rollins is an iconoclast, the kind of thinker Palin’s publicity team likes to bill her as. Rep. Bachmann could not have been ignorant of Rollins’ opinion of Palin– he has been a vocal detractor of hers for some time, famously telling her “you’re not Ronald Reagan” on CNN. But he has also gone after (one could argue) even bigger sacred cows in the Party like Chris Christie, calling his Disney Land trip during last year’s blizzard “inexcusable.” What’s more, calling Palin “not serious” following her myriad forays into pop culture and her status as a private citizen after only two years as the governor of a barely-populated state is not a particularly controversial thing to say here in the real world– only those in the Palin fanatic bubble would be shocked that someone who has worked with credentialed, well-read, and experienced public servants would have misgivings about her.

So yes, the Bachmann/Palin showdown does bring out some of the worst in their opponents, but they are not exclusively at fault. Their supporters, especially the more rabid elements of the Palinist cult, only encourage such social perceptions with their blind decrees that conservative women cannot disagree on policy issues ever, or that an accomplished stateswoman with a proven dedication to her craft does not have the right to hire political professionals who have a hard time respecting a walking media circus with two years of work to her name. Rep. Bachmann caving to that pressure should she reprimand Rollins would only serve to perpetuate the vicious cycle.