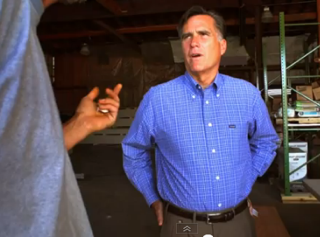 Mitt Romney stumbled a bit in his ad debut this week, releasing a spot that disingenuously quoted the President and receiving the expected heat for it. But you wouldn’t know the campaign flubbed judging from his advisers’ comments in the spin room after Thursday night’s debate, where the group was celebrating the attention received for it.

The ad is bringing Romney more bad press than he has gotten in some time– at least compared to candidates like Rick Perry and Herman Cain— as it misuses President Obama’s words to make it appear as if he has said of this campaign, “if we keep talking about the economy, we’re going to lose.” In saying that, the President was actually quoting someone on Sen. John McCain‘s staff during the 2008 election; the ad does not give any indication that the words are not President Obama’s.

While some in the media are calling it a faux pas and the DNC has already released a response to the ad, the reaction from the Romney team appeared collected and, as Slate‘s Dave Weigel noted, almost victorious:

“They always squeal the most when you hold a mirror up to them,” he said, “and they overreacted, clearly. All they did was make the ad more effective.”

“There was a time when the Obama campaign had real discipline,” joked Stuart Stevens, a senior Romney strategist. “Today was a total meltdown. You had the press secretary to the president of the United States talking about an ad that was running on one station in New Hampshire. There was a time when Jay [Carney, a former reporter for Time] wouldn’t even have written about this. Total meltdown. It’s as if you have somebody on a witness stand, accused of anger management issues, and he jumps off the stand and comes after you.”

What about the tough response from Politifact?

“Do you know how many times they did that to Barack Obama in 2008?” he said. “Quite a few. And that’s utterly absurd. Did he say this? Yes. Did we say he said it in a certain context? No.”

The fact that his staff seems to not only not be concerned about the backlash, but to actually be happy with the ad’s reception gives the impression that Team Romney is almost deliberately committing faults in the hope that it will generate more buzz for their candidate, which is a tactic whose viability the voters will eventually determine.

But aside from being a bizarre (at best) way to go about promoting a candidate, this ad mishap should sound uncannily familiar to anyone who watched Saturday Night Live this weekend. It wouldn’t be the first time SNL preempted the Romney campaign, either; remember when New Jersey governor Bobby Moynihan endorsed Jason Sudeikis‘s Romney, several days before the actual Governor Chris Christie held the real-world version of that press conference? Conspiracy theorists: get to work.