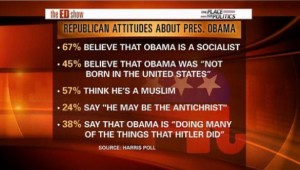 Now that the media has squeezed every last eyeball from the year of frenzied interest in health care reform,  it appears that Crazy Republicans are, at the very least, the interim replacement. A supporting player in the health care drama, it looks like they have become the story now.

On the heels of racial and sexual slurs, spit and brick attacks,  and death threats, a new Harris poll that’s making the cable news rounds cements the notion of the scary conservative who believes that President Obama is, among other things, a Nazi-esque Muslim Antichrist.

The poll has been fairly ubiquitous on cable news shows the past few days. The numbers are scary, indeed. 67% believe the President is a socialist, although Harris didn’t do anything to verify that respondents knew what that word meant.

The real sizzler, though, is the 45% who believe he wasn’t born in the US, and the 24% who say he “may be the Antichrist.” There’s no way to tell if there’s any overlap, so it could be that up to 69% of Republicans believe the President was either born in another country, or that he was born here, but of a jackal.

My first instinct was that the cablers were paraphrasing, and cooking the numbers by including “not sure” responses. Nope, these were straight true/false questions, no “unsure” responses.

The poll’s methodology is not rock solid. While the sample size is more than adequate at 2,320 (scientific pollsters frequently use samples in the 500 range), the poll is an interactive survey, as ABC’s Gary Langer points out, “done among people who sign up to click through questionnaires via the Internet in exchange for points redeemable for cash and gifts – not a probability sample.”

Others have attacked the way the questions were asked, and they have a point. For example, if you believe in an Antichrist, end-times theology states that it could be pretty much anyone. Hell, I’d probably score higher than 24% on this poll.

As for “doing many of the things Hitler did,” aside from slaughtering millions and admiring his ball, who doesn’t? Taken literally, it’s a tough statement to disagree with, especially when you’ve got Bonus Web Bucks riding on it.

This is not to say that Harris’ survey is necessarily weaker than others of its kind. This kind of interactive polling is relied upon all the time for market research and the  like. It’s just not as solid as other, more expensive polling methods. Zogby International, for example, uses similar methods.

Even if you grant a pretty wide margin of error, though, people will assume that where there’s smoke, there’s fire. The Republican leadership’s willingness to flirt with ideas like the birth certificate conspiracy, or their insistence that health care reform is an “apocalypse,” will appear to be bearing fruit.

Methodology aside, the battle to paint Republicans as unhinged loons has already been won, as this poll has been splashed across TV and computer screens as a series of bullets, straight to the heart of conservative credibility. The next stop? Gun rights rallies scheduled for April 19, the anniversary of both the end of the 1993 siege in Waco, and the 1995 Oklahoma City bombing. Liberal cable hosts like Rachel Maddow are already raising an eyebrow, if not an alarm.

How can conservatives combat the new narrative? That’s a tough question. Once people start looking at you like you’re crazy, it’s tough to shake that impression. The louder you protest your sanity, the crazier you look. Their best bet may be to lay low until someone overreacts, and that becomes the new story.