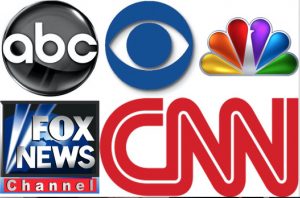 Over the past couple of months, and especially since the shocking election victory by Donald Trump, there has been a lot of attention paid to the impact of deliberately fake news stories on the election results. While there’s been lots of column space and cable news airtime devoted recently to #Pizzagate and the dissemination of false info and conspiracy theories by skeevy media outlets, not enough has been said about one of the other ways lies get passed off as fact.

And that is when cable and broadcast news hosts, anchors and reporters just roll over and neglect to correct the record when one of their guests tosses out an obvious and easy-to-debunk falsehood.

“They wrote those e-mails. They’re the one who had a secret server. They’re the ones who didn’t put proper protocols in place…And I’m not disqualifying the second piece of this. But we keep forgetting in this discussion that it was them who had a secret server. It was them who didn’t abide by rules and regulations set by the government and by the State Department to ensure that some of this kind of stuff wouldn’t happen. And that’s been lost in this discussion.”

Now, this wasn’t just someone exaggerating for effect or bending the truth a little bit or trying to only give half of the story. No. This was a political operative straight up making the claim that the hacking of John Podesta’s personal email account was directly related to Hillary Clinton’s email server. Even worse, the statement tried to tie all of the Russian hacking allegations of the DNC and Podesta accounts into the issues surrounding the server, even though the two issues are not related at all.

This should have been an easy fact-check, something that should have stopped the interview dead so Blitzer could push back on what Spicer had stated. Blitzer should have informed viewers that what Spicer said was just not true. The CNN host should have asked Spicer why he purposely conflated two separate issues to make it appear as if they were all the same thing.

Instead, Blitzer just said that he needed to get to the next question because he knew Spicer needed to get going. Or, in other words, Blitzer didn’t care one bit what Spicer said or the truth behind those words but just wanted to get through the segment and hit his spots.

This isn’t an isolated incident for Wolf, either. During the heat of the election campaign, he tended to have Trump spokeswoman Katrina Pierson on quite a bit. During one hit, Blitzer asked Pierson if she was saying a tape of Trump pretending to be his own PR guy wasn’t him. When she answered that yes, that was exactly what she was saying, he just said “All right then, let’s move on.”

A minute later, in response to a question about Trump’s support among white supremacists, Pierson made the claim that media outlets were making fake Twitter accounts pretending to be white nationalist Trump supporters. Despite that being a pretty bold statement, Blitzer just moved on to another question without pressing further, asking the Trump flack about the real estate mogul’s unreleased tax returns.

Of course, there are other non-Wolf examples we can point to. There’s the infamous Commander-in-Chief Forum hosted by NBC’s Matt Lauer in which Lauer was excoriated for allowing Donald Trump to spew out numerous falsehoods without any follow-up or fact-check, specifically over his already-debunked claim that he was initially against the Iraq War.

We also have Meet the Press’s Chuck Todd letting Donald Trump slide this summer on a question about whether Roger Ailes was advising the Trump campaign after being ousted at Fox News. And perhaps even worse than that, Todd’s colleague Andrea Mitchell admitted in September she didn’t even attempt to ask Hillary Clinton certain questions because she feared the interview would be stopped dead.

To be fair, it may seem I’m just cherry-picking some bad moments. And, to give at least Wolf credit, if you were to check out our site’s archives, you would see many instances of us highlighting times when the anchor “grills” or “confronts” an interview guest, battling with that person over a contentious detail or fact.

But therein lies the bigger point. Those are the moments that stand out. We tend to cover them because they are atypical. While they should be part and parcel of any news broadcaster’s job, we now seem to treat it as something surprising. Thus, an article and video showing the confrontation.

That fact is, moments like we saw in the Spicer interview are fairly commonplace, and seen as the standard humdrum fare of any TV news segment with a politician, pundit, strategist or any other political lifer. A partisan goes on with the full expectation that he/she will be able to toss out any number of falsehoods and not be called out on them based on the concept of fairness. They aren’t lies…they are talking points.

Fake news — created by scurrilous, anonymous, amoral content creators for the purpose of being widely shared on social media and generating boatloads of advertising revenue while sowing chaos in our media landscape — is an extremely troubling and damaging phenomenon that absolutely needs to be addressed.

At the same time, more attention needs to be paid to those who work in the so-called real news industry. For those presenting the news to millions of viewers everyday, it is imperative that you make sure your audience is properly informed.