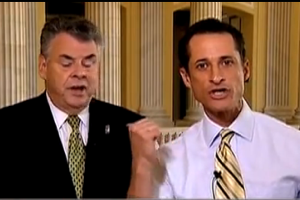 Yesterday on Fox News, New York Congressmen Anthony Weiner and Peter King did battle over the passing of a bill to aid 9/11 first-responders that developed health problems. Even with discussion moderated by a fairly silent, impartial Bill Hemmer— who piped up mostly to point out that everyone hates Congress— it got pretty heated. Now imagine that same conversation with Sean Hannity as host.

The duo continued their discussion on Hannity’s radio show yesterday, and, needless to say, Hannity did not stay out of the discussion as much as Hemmer did. In fact, after a few words from Rep. King, Hannity took up his cause much more forcefully than King did, accusing Weiner of not reading the bill at all and being a “phony.” To quickly recap: Congress voted down a bill to honor and aid 9/11 first-response workers, which led Rep. Weiner to a very loud monologue on the House floor. Rep. Weiner blames Rep. King for not lobbying enough Republicans and Rep. King blames Rep. Weiner for politicizing the bill such that it scared Republicans away. In the little we hear in this clip from Rep. King, we hear him call the failure of a bill a “disgrace” and say he has “never heard of a time before of a party having the votes and then not passing the bill.”

For most of the rest of the segment, Hannity asks Rep. Weiner repeatedly if he has read the entirety of the bill. When challenged to answer whether he has read the bill himself, he answers “I didn’t know you were going to be on until 1:30 this afternoon!” and expands his question to whether Rep. Weiner has voted for a bill he has never read at all. Not getting an answer, he yells, “Yes, you have!,” calls Rep. Weiner a “phony,” and tries to get him to vow never to vote for a bill he has never read “again.” Rep. King tries to interrupt at some point as well, to which Hannity comically exclaims, “Oh my God, I feel like I am in kindergarten with you two!”

Perhaps the most comical part of the interview was the goodbye, with Rep. Weiner shouting over Hannity as he sheepishly says “happy, er, glad you got married.”