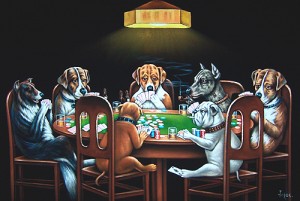 The news that unemployment fell to 8.6% in November, the lowest level since March of 2009, is sure to be greeted by a predictable mix of celebration and derisive parsing, but behind the scenes, Republicans have got to be producing trouser bricks. Their strategy to defeat President Obama is almost entirely dependent on an economy that’s headed in the wrong direction, but despite their efforts to hamper short-term job growth, a glimmer of (yes) hope has arrived.

There’s a lot to pick apart in November’s jobs report, to be sure, but that dramatic plunge in the unemployment rate is what John and Jane Q. Public are going to focus on, and it’s going to be a tough sell to rain on the parade that the public has been so desperate for. It’s true that November saw less-than-gargantuan net job growth of 120,000, and that part of that drop in unemployment is due to people who just stopped looking for work, but it sure beats the hell out of losing 750,000 jobs a month.

Embedded in those jobs numbers, though, is an open-and-shut case against Republican policies and obstruction since breaking the filibuster-proof Democratic majorities in Congress. The smoking gun:

Construction employment showed little movement in November. Employment in the industry has shown little change, on net, since early 2010.

Government employment continued to trend down in November, with a decline in the U.S. Postal Service (-5,000). Employment in both state government and local government has been trending down since the second half of 2008.

You can draw a thick, bright line from these facts to Republican actions. That first item would be drastically different if Republicans in Congress decided to pass the American Jobs Act, which independent estimates say would create about 2 million jobs in the near term, many of them on infrastructure projects.

The Republican obsession with cutting spending during this deep recession has already cost over half a million public sector jobs, and continues to bring down overall job growth. The private sector added 140,000 jobs in November, still not great, but again, more than the net job growth. The American Jobs Act also included measures, defeated by Republicans, to stem public sector job losses.

So, while 8.6% is encouraging, imagine how much people would enjoy a 6.9% unemployment rate that included those two million American Jobs Act jobs, and the half-million public workers (teachers, cops, firefighters, etc) who have fallen to the Republican austerity ax? That doesn’t even take into account the ripple effect of those wage-earners on the private sector, which most certainly would have brought that rate even lower. (Imagine, too, how that rate would look without an American auto industry.)

Politically, it will be tricky for President Obama to capitalize on this bump. The administration has shown reluctance, in the past, to trumpet middling jobs news, and this close to the election, it’s risky to make a case based on an unemployment rate that could take a turn for the worse. However, the dramatic surge in consumer demand over the Black Friday weekend is an encouraging sign that there’s decent news ahead. The conventional wisdom has been that if unemployment falls below 8%, President Obama wins in a cakewalk. In addition to the cakewalk, he’ll also win reelection.

Whatever happens next, though, this is the time for Democrats to hammer home the opportunity cost of Republican obstruction and austerity. The Senate provided an elegant example of this last night, when Republicans defeated a payroll tax cut extension that won a 51-49 majority, but fell short of the 60 votes needed to overcome a filibuster. If the House follows suit, that $1500 tax increase on the middle class will almost certainly damage the consumer demand that helped fuel November’s job growth.

It’s also possible that the economy continues to grow, and unemployment continues to fall, despite Republican recalcitrance. That’s got to be their greatest fear right now, because as it stands, President Obama is within striking distance of the “magic number,” and there is no GOP Plan B. Their situation reminds me of my favorite poker joke.

One morning, a guy from New Jersey hears a voice in his head that says, “Quit your job, sell your house, take all your money, go to Las Vegas, and enter the World Series of Poker.”

He ignores it at first, but he keeps hearing the voice, and begins to believe. He quits his job, sells his house, takes the money, goes to Las Vegas, and enters the World Series of Poker.

Excited, he sits down to play his first WSOP hand, his entire life stacked in front of him. He maintains his best poker face as the dealer pitches him a pair of red aces. “Go all in!” says the voice in his head.

He calmly pushes all of his chips in, and two other players call his bet. The flop comes 7, 8, 9, all clubs.