Why Did the RNC Denounce Trump, But Dodge on Huckabee? 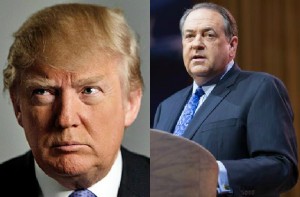 “Our job is not to sit here and call balls and strikes,” he said. “Governor Huckabee made his comments. …They should speak for themselves. It’s not my job or the RNC’s job to get in the middle and say don’t talk about this this way or that that way.”

To which this writer must respond: Really? Because two weeks ago, the RNC sure had no qualms about telling the Republican frontrunner how he should speak.

But when Donald Trump implied that Republican Sen. John McCain was no war hero because he was captured by the Viet Cong, Spicer threw the RNC’s historical reticence to the wind and came out with a blistering denouncement: “Senator McCain is an American hero because he served his country and sacrificed more than most can imagine. Period. There is no place in our party or our country for comments that disparage those who have served honorably.”

Don’t get me wrong, Trump’s comments deserved loud condemnation from those on both sides of the aisle. But the RNC is now in the unenviable position of explaining why every new embarrassing remark from a Republican candidate isn’t worth denouncing, while Trump’s remark ultimately was.

We all recognize the real reason the RNC denounced Trump: because he’s a huckster that they desperately want out of the race, and he finally said something they thought could be disqualifying. But obviously, the RNC can not and will not ever admit that they are trying to push a candidate out of the race. So instead, it’s now their duty to explain why Trump’s comments were beyond the pale, but comparing a sitting president to the perpetrators of the worst genocide known to man is beneath their notice.

There are a few explanations for their disproportionate response the RNC can turn to, each more distasteful than the last. They could argue that they have more of a responsibility to stick up for a respected member of their own party than they do the effective leader of the Democratic Party. But that only come off as hyper-partisan, substituting politics for any sort of objective standards of decency.

Worse yet, they could argue that Trump’s comments really were obviously worse than Huckabee’s comments (and every other comment the RNC never officially condemned). Some conservatives have defended Huckabee, but does the RNC really want to tell the Anti-Defamation League and the Israeli ambassador that they know better about which sort of comments are actually offensive to those affected by the Holocaust?

The best case I think the RNC can make is that while Huckabee used extreme language in the service of a substantive policy issue (the Iran deal), Trump was attacking John McCain’s status as a war hero for no other reason but to be an ass. But again, that sends the message that they have no problem with Republicans resorting to extreme language and insults when it means scoring political points. The ends, they would implicitly be signaling to candidates, justifies the nastiest means.

The RNC and DNC had a good thing going from them. By consistently refusing to condemn their own candidates no mater how bad, they could appeal to the principle of the matter to dodge embarrassing questions. But the RNC shredded that principle to criticize Donald Trump. They can’t pick and choose which controversial comments to ignore two weeks after condemning the Republican frontrunner.

All that’s left is for the RNC to condemn Mike Huckabee’s comments. Or maybe don’t. But when the next Republican president faces inevitable Nazi comparisons, don’t pretend to be outraged.