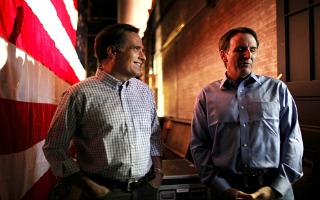 The relentless hammering of Mitt Romney by President Barack Obama’s campaign operatives and allies about his tenure with the venture firm Bain Capital and his holding tight to decades of tax returns has taken a psychological toll on the Romney camp. Back on defense against the Obama team, the Romney campaign appears poised to unleash their most potent, narrative-altering weapon of the campaign cycle – the selection of the Romney ticket’s running mate. But a story in the New York Times on Sunday indicating that the former Massachusetts governor is poised to select one of a few high profile but relatively uninspiring Republican officeholders from the upper Midwest has left the political world yawning. If the intention is to change the subject, so to speak, a lackluster VP pick may fail in that effort.

RELATED: Ann Romney: Mitt Has Been ‘Looking At’ Choosing A Woman For VP

“Mr. Romney has reached a decision, his friends believe, and he may disclose it as soon as this week,” reads the New York Times story by Jeff Zeleny.

Zeleny’s report in the Times indicates that Romney has been very impressed by former Minnesota Gov. Tim Pawlenty – a former Republican primary rival of Mitt Romney, and is a likely choice to be the vice presidential nominee.

If Pawlenty is not the nominee, two other experienced and lackluster potential VP nominees include Ohio Sen. Rob Portman and outgoing South Dakota Sen. John Thune – two equally uninspiring but safe choices. More exciting but untested names like those of Florida Sen. Marco Rubio or Louisiana Gov. Bobby Jindal appear to be dropping further down on the shortlist of potential veep picks.

Furthermore, a Pawlenty or a Thune on the ticket would avoid what some pundits have called the “mistake of ’08.” That is the perception among political observers that Sen. John McCain’s selection of Alaska Gov. Sarah Palin in 2008 provided a boost of enthusiasm in the short term for McCain. But Palin’s lack of experience or ability to speak extemporaneously about complex subject matter caught up with the campaign.

In 2008, McCain needed that boost enthusiasm from the electorate – behind the eight ball in the polls with the new, young and vibrant Sen. Obama. Palin’s selection brought the race to about even in the tracking polls — a post-convention bounce even put McCain up over Obama with 48 to 45 percent support — prior to the collapse of the mortgage-based derivatives market and the shuttering of firms like Bear Stearns.

Romney does not need that boost. In fact, his advisors seem to believe that a Hail Mary pass in his vice presidential selection may do more harm than good to his campaign. They reason that anything that takes the focus of the electorate off of President Obama’s record is self-defeating. If the election is a referendum on Obama’s first term, he will lose.

But there is a danger in this complacent line of thinking as well. President Obama’s head-to-head matchup polling against Romney has so far greatly outperformed his job approval polls. Some speculate that his job approval ratings are “defying gravity” at the moment for myriad reasons, but the foremost being that the President’s personal favorability remains quite strong. What’s more, most Americans – including independent voters – do not blame the President for the economy’s slow recovery.

Perhaps Romney is correct – he does not need a running mate who will use much, if any, oxygen with the media. That he is running against an incumbent Democratic president may make up for all the enthusiasm he is presently lacking on the right and among independent voters by Election Day. But if the resulting lack of enthusiasm is not enough to derail the conversation about his background at Bain, Romney will have fired his best shot of the campaign for nothing. If that is the case, whether deserving or not, there will be no end to the speculation that the former Massachusetts governor does have something to hide.