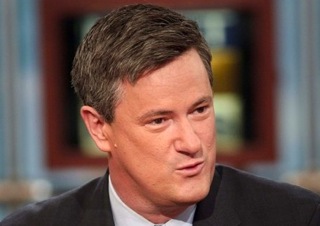 Joe Scarborough has taken a lot of heat in his career for going against the conservative tide and condemning some of the most extreme rhetoric on the right. In light of this, his recent fascination with Donald Trump, as expressed in a Politico column this week, comes as a bit of a surprise. Scarborough compares Trump to Ronald Reagan, and seems bemused, if not impressed, with his ability to express extreme views without caring about what others think.

“The disconnect between Washington’s view of Reagan and America’s perception of him bears repeating in a year when so many GOP candidates are being showered with contempt by a new generation of Washington elites,” Scarborough writes, noting that Trump has now eclipsed Palin in amassing public scorn from those “in the know.” Scarborough, who spoke with Trump in writing the article, doesn’t seem to agree with everything Trump says, but doesn’t take time to debunk it, either. Particularly, Scarborough lets Trump’s words speak for themselves on his belief that President Obama was born abroad, and that his autobiography was written by domestic terrorist Bill Ayers:

“Bill Ayers wrote ‘Dreams From My Father,’” Trump told me. “I have no doubt about it. That first book was total genius and helped get him elected. But you can tell Obama did the second book himself because it read like it was written by somebody of average intelligence with a high school education.”

For Trump, the theory feeds into his belief that Obama is unfit to be president.

“He is the most overrated guy. It’s unbelievable. Obama is worse than Jimmy Carter, and I put Carter at the head of the pack for bad presidents.”

“This is not how serious presidential candidates are supposed to talk,” Scarborough writes of Trump, though to him this is precisely what makes him a viable candidate. “Anyone who believes political commentators’ scorn for Trump will keep him from winning the Republican nomination need only read the nasty things Washington’s wise men said about Reagan in 1979,” he notes. But Scarborough doesn’t ever quite confront the fact that much of what Trump has been promoting goes beyond the pale in terms of ad hominem rhetoric. Granted, Reagan never suggested Carter had a terrorist write books for him or that he was born overseas, but he did have some wacky foreign policy ideas!

Trump, now running up to second in some GOP primary polls, would not be so surprising a candidate to catch Scarborough’s eye if the latter had not made a career out of calling for toning down extreme rhetoric. Even in this piece, Scarborough takes a detour from trying to understand Trump to take a swipe at perennial target Glenn Beck: “When your political rhetoric shocks a man who believes the rise of the Antichrist could be ushered in by President Barack Obama’s agenda, it might be time to refocus your communications strategy.”

Say what you will about Beck (and Scarborough has said a lot about him), but he has never been a birther and his theories tend to incriminate organizations professionally, not individuals personally lest they be a head of said organizations or somehow directly professionally involved. Nor does Beck have or aspire to any governmental power the way Trump does. The disapproval directed at Beck repeatedly both on television and in this column appear inconsistent with the cautious interest in Trump presented here. Dismissing Beck’s theory that the radical left and Islamic fundamentalists will somehow unite to form a pan-Middle Eastern communist caliphate and applauding– albeit in a half-snickering, Charlie Sheen way– Trump’s theory that Bill Ayers wrote Dreams of My Father when one man is polling well for the most important job in the world and the other is stepping down from his entertainment hour within the next year is simply hypocritical.

Perhaps as a buffer against such criticism, Scarborough ends his bizarre column with a much more apt comparison than his Reagan analogy– to Ross Perot, and a reminder that Trump is no Reagan, “but he isn’t Palin either.” Most have unanimously agreed that any flair in the wasteland of personality that a Tim Pawlenty–Mitt Romney led presidential field represents is a good thing– you could almost hear the internet collectively cheer when a Pawlenty staffer drunkenly threw up in a random yard in Iowa. But in spending a good portion of his TV time calling out irresponsible rhetoric, Scarborough has, to a degree that many others haven’t, given up his privilege to partake in the fun.