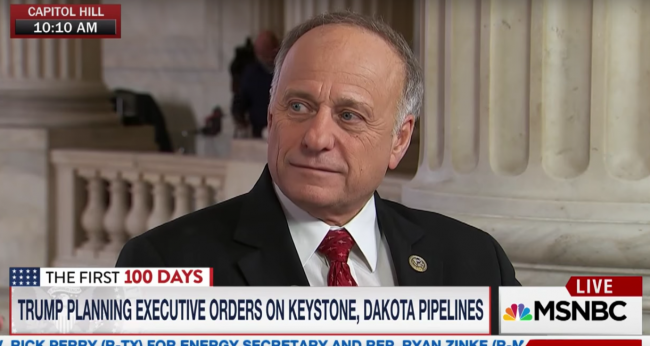 After the Congressman tweeted Sunday that, “we can’t restore our civilization with somebody else’s babies,” he came under immediate fire from liberal media and commentators online. An attempt to explain the tweet during a Monday appearance on CNNs New Day failed to stop the bleeding.

Now, it seems, even GOP elected officials and pundits are racing to put distance between themselves and King.

“I do not agree with Congressman King’s statement,” Jeff Kaufmann, the former chairman of the Iowa Republican party said in a statement, The Hill reported. “We are a nation of immigrants, and diversity is the strength of any nation and any community.”

In addition to Kaufmann, King also took heat from his House GOP colleague, Rep. Carlos Curbelo‏, who even offered King a trollish hashtag.

.@SteveKingIA What exactly do you mean? Do I qualify as “somebody else’s baby?” #concernedGOPcolleague

Former Ted Cruz communications director Amanda Carpenter, said she was also starting to spill some of the water she had been carrying for the longtime Iowa Congressman.

Steve King is showing himself to be the person I always denied he was. Please change.

He means “homogeneous,” but he’s so in-bred he doesn’t know the difference. https://t.co/hfLjBgQQQ9

Yeah, we’ll never save our culture with children of immigrants, right, Steve King, you moron? https://t.co/xtd3FUbK9j