The Real Truth About Gov. Rick Perry And Secession 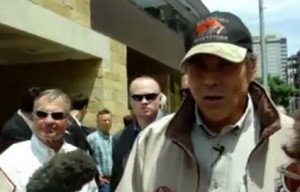 As Texas Gov. Rick Perry’s Texas-sized mouth garners gushers of media attention in the opening days of his presidential campaign, fact-checking website Politifact has been working overtime to ride to Perry’s rescue, rating statements that Perry alternately “threatened to” or “wanted to” secede as “false.”

West Wing Report‘s Paul Brandus points out that it was on this date in 1862 that President Abraham Lincoln laid to rest any doubt about the right of states to secede. Politifact concedes that point, yet ignores it in analyzing the accusations against Perry.

In defending Perry, Politifact stipulates that the Texas Governor (whether he believes it or not) has advanced the notion that Texas can legally secede, and has not backed down from that. They also concede that this notion is false, citing a constitutional scholar. But aside from the fact that the Supreme Court has since ruled that secession is unconstitutional, it was 149 years ago today that Abraham Lincoln weighed in, with little subtlety:

As to the policy I “seem to be pursuing” as you say, I have not meant to leave any one in doubt.

I have here stated my purpose according to my view of Official duty: and I intend no modification of my oft-expressed personal wish that all men everywhere could be free.

Bottom line: Texas cannot legally secede. We fought a war over it, and the Supreme Court ruled on it for good measure. The folk belief in such an ability doesn’t change that, and whether Rick Perry truly believes Texas can secede, he knows that the notion appeals to many voters in his state.

That fact greatly changes the character of Perry’s statements. Rather than an academic discussion of a particular policy option, Perry’s remarks were in reference to an illegal act that would be harmful to the United States. In case you missed them, here they are:

Cast in that light, let’s see how Politifact’s defense of Perry holds up. On the charge of “threatening to secede,” Politfact found that “In a politically theatrical moment, Perry edged toward a secession threat. Then or since, however, he hasn’t said Texas should quit the United States. (You wudda read all about it.)”

But if we replace secession with some other illegal, harmful act, say, burning down the White House, does Perry’s statement constitute a threat? “We’ve got a great White House. There is absolutely no reason to burn it down. But if Washington continues to thumb their nose at the American people, you know, who knows what may come out of that?”

It may have been empty, and it certainly was “politically theatrical,” but a threat, it was.

Obama batted away the Texan, as did Jay Carney, the White House spokesman, who told me: “We may disagree with our political opponents, but we certainly think they’re all patriots — even those who wanted to secede from the union.”

There’s an argument to be made that reserving the right to do something (“I don’t want to smack you, but I can if you keep it up”) is similar to wanting to do it. But in the second clip, Perry announces, in the first person plural, that “we can leave any time we want, so we’re kind of thinking about that again.”

The totality of Perry’s statements can fairly be interpreted that he prefers not to secede, but in claiming the unilateral right to do so, and the possibility of its exercise, Perry (and Texas) would be seceding of their own free will. Ergo, they would have to want to do it, and as Perry said elsewhere, he thinks that other states would want that same right:

A day after the rally, the Statesman reported, Perry called potential secession a “side issue of Texas history. … We are very proud of our Texas history; people discuss and debate the issues of can we break ourselves into five states, can we secede, a lot of interesting things that I’m sure Oklahoma and Pennsylvania would love to be able to say about their states, but the fact is, they can’t because they’re not Texas.”

Finally, Politifact defends Perry for abridging his own statements, in an attempt at a walkback. They rated “mostly true” Perry’s explanation that he said “there’s ‘absolutely no reason’ for Texas to secede,” explaining that the “mostly” part was due to a selective omission:

All in all, does Perry accurately revisit his original comments on secession that day?

For the most part, yes. However Perry doesn’t get to his assertion that Texas has the right to secede or his speculation about “who knows what may come” from people angry about actions in Washington.

Those omissions, though, completely change the meaning of what Perry said. To use Rachel Maddow‘s frequent example, it’d be like quoting an extortionist as saying, “Nice place you got here,” while leaving out, “It’d be a shame if anything happened to it.”

Although they didn’t weigh in on it, I doubt Politifact would have been so charitable to Ed Schultz over his smaller Perry omission.

To be clear, while I disagree with Politifact’s findings, and believe that their deployment of red lights in Perry’s defense obscures the truth, I don’t believe for a second that Rick Perry wants to secede from the United States, or that he even thinks he can. Clearly, his remarks were intended to appeal to those who do believe in such a right, and take pride in it.

Furthermore, neither Jay Carney, nor President Obama, nor Perry rival Jon Huntsman, believe that. While their statements, as I’ve shown, have been accurate interpretations of Perry’s words, Perry’s opponents have been using them to hold him accountable for his own words.

Former Obama Press Secretary Robert Gibbs raised the issue of Perry’s secession remarks in response to Perry’s suggestion that President Obama doesn’t love America, and when I asked him if he thought Perry really did love America, Gibbs mimicked Perry’s passive/aggressive rhetoric by telling me, “You need to ask him. I’m saying, you’re a good reporter, go ask him.”

At worst, Gibbs, Carney, and Huntsman are guilty of a greenish-yellow “too cute” ruling.

Politifact’s string of red lights gives the impression that people are just picking on poor ol’ Rick Perry, but the reality is that Perry is simply being held accountable for some Ex Lax-loose talk.