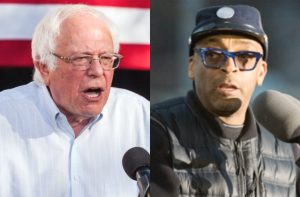 Bernie Sanders recently sat down with director Spike Lee (one of his biggest star supporters during the primaries) to discuss where to go from here after Donald Trump‘s victory, especially where the Democratic party is concerned.

Their chat, posted by The Guardian this past weekend, makes it very clear that Lee is very worried about Trump having the nuclear codes. He brought up the controversies about Debbie Wasserman Schultz and Donna Brazile to Sanders––saying “Cheating goes both ways, huh?”––before getting around to why he thinks the Democrats lost, using a sports analogy.

“I’ve seen it too many times,” Lee said, “when a team thinks they’ve got it all won, just wrapped up, and you see players go down the sideline and start celebrating, and then they reach the goal line and fumble. The Clintons… thought they had it won. And what do the great coaches always say? Keep playing until there is no time on the clock! And it seems to me the Clintons were celebrating before the day was up.”

Sanders agreed with Lee’s characterization that the DNC is “a shambles” right now, and he called for a “transformation of the Democratic party”:

“I think we need a house-cleaning. I think the DNC needs an entirely new direction. I think it needs leadership, and I think it needs to be very clear about the fact that it stands with working families and is prepared to take on the billionaire class and Wall Street, and corporate America, and the drug companies and the insurance companies. People are hurting.”

Sanders has recently made comments indicating that he believes Democrats need to do more than focus on identity politics.

And in his interview with Lee, Sanders said that while there’s a lot of racism and xenophobia out there, a lot of people voted for Trump because he’s “really hurting.”

Lee also bluntly asked Sanders, “Where is the hope?” And Sanders again went back to how the Democratic party needs to change:

“The hope is to understand that the Democratic party has stumbled very significantly in the last number of decades… The Democrats have lost over 900 state legislature seats in the last eight years. What that tells me is that the Democratic party has got to very fundamentally rethink who it is and where it goes. It has to shed the current situation where it’s a party of the liberal elite… The Democratic party has got to say we are on the side of the 99%. Our party is not about having fancy fundraisers, it’s about going into union halls, veterans’ halls, farm communities, the inner cities. It has to bring people together around the progressive agenda and make government work for all of us and not the 1%.”