Were CNN’s Acosta, Fox’s Hemmer Right to Go After President So Passionately on ISIS Strategy? 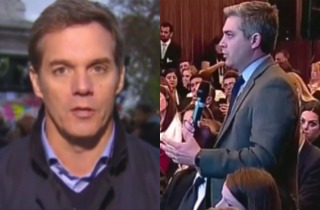 Jim Acosta, Bill Hemmer: A correspondent and a news anchor who don’t make the pages of Mediaite all that much.

That’s not a criticism, of course, as our stories and columns invariably focus on the opinion side of the cable news house. For those not in the know, Acosta is CNN’s Senior White House Correspondent, while Hemmer co-anchors a mid-morning news program for Fox News. Know this: both are exceptional in their roles. But the kind of controversial, compelling and/or outrageous TV that emerges from programs from Morning Joe to New Day to The Five to Hardball to The O’Reilly Factor to CNN Tonight to Real Time simply don’t come from guys like Acosta and Hemmer, because their respective jobs are to present the news, not pontificate on it.

Monday, however, offered a sudden break from what viewers are accustomed to seeing from each. It began with Hemmer reporting live for America’s Newsroom from Paris on the latest developments following Friday’s horrific attacks by ISIS that left 129 dead and scores seriously injured. That reporting was rightly interrupted by the President’s remarks out of Turkey. Would the Commander-in-Chief show leadership, passion, fight and foresight in this fight against this expanding, insidious threat? Nope…not even close.

Instead, we got stubbornness with a heavy dash of lethargy out of the president, all while insisting his strategy of flying an average of 7-10 sorties a day was working in degrading and destroying ISIS (context: 110 sorties were flown per day in the first Gulf War; 50+ daily in Kosovo). No matter… the leader of the free world also displayed an odd condescension around even considering trying any other approach, mockingly asking for any better suggestions on strategy than his, which isn’t much of a strategy at all. Per Eugene Robinson of the Washington Post: “Obama’s tone in addressing the Paris atrocity was all wrong. At times he was patronizing, at other times he seemed annoyed and almost dismissive.” Here’s Roger Cohen’s (New York Times) take via Twitter: “Where was the anger in that Obama press conference? I’m in Paris. His words fell shamefull short of sentiment here.”

Mr. Obama’s obvious detachment was not lost on a few reporters as well covering the G-20 Summit in Turkey, especially Acosta, who phrased his question this way:

“I wanted to go back to something you said… earlier when you said you have not underestimated ISIS’s abilities. This is an organization that you once described as a JV team, that evolved into a now occupied territory in Iraq and Syria and is now able to use that safe haven to launch attacks in other parts of the world. How is that not underestimating their capabilities? And how is that ‘contained,’ quite frankly? And I think a lot of Americans have this frustration that they see that the United States has the greatest military in the world, it has the backing of nearly every other country in the world when it comes to taking on ISIS. I guess the question is– and if you’ll forgive the language– is why can’t we take out these bastards?”

Is that considered over the top? Grandstanding? If Accosta had a history of doing so like, say, ABC’s Sam Donaldson did infamously back during the Reagan years, that’s one thing. But questions posed in this fashion simply isn’t Acosta’s way. He later explained his thought process to The Huffington Post:

“I just wanted to ask something that’s on all our minds. Plain and simple.”

If my usually-benign, mostly apolitical Facebook feed is any indication, Acosta isn’t wrong in that assumption. Many Americans are angry. They are frustrated with the president’s lack of urgency and aggressiveness in taking on the most evil entity the world has seen since Nazi Germany. A Reuters/Ipsos poll taken over the weekend reflects that, with 60 percent of those polled stating they want the United States to do more in the fight against ISIS, and 17 percent listing terrorism as their top concern, tying the economy for the top issue on voters’ minds (making the 2016 election suddenly look like 2004, at least for now).

So when Acosta asks a question in the fashion he did, he’s correct that the phrasing matches the mood of many across the country.

In the case of Bill Hemmer on Fox, the editorial was much more pronounced… even more passionate. Here’s a sample:

“President Obama has made it quite clear in that Q-and-A that lasted more than 45 minutes that he has accepted there are evils in this world and evils in places like Paris, France and this is something that we all must face today… If you’re at home wondering with your own set of anger and your own set of fears about what can happen next, you are not alone, because that is precisely what you feel here in Paris, France. And if you were awaiting clarification on your feelings through that Q-and-A, you weren’t gonna get it.”

Was Hemmer–a former CNN anchor from 1995-2005 and an almost-30-year news veteran–playing to the crowd? Well, again, just take a look at his history, which is notably unspectacular in terms of controversy and devoid of soapbox moments. Instead, this appeared to be a human moment for Hemmer as it was for Acosta. And not to draw headlines or attention… there’s no need to be auditioning for anything at this point for either of their careers. Instead, and watch the video above before somehow coming to a conclusion, it appeared to be a genuine frustration and exasperation that these attacks by ISIS will go unpunished while fear of something similar or worse happening here in the U.S. a bigger concern. Note: another finding in the aforementioned Reuters/Ipsos poll shows that 63 percent of Americans fear a Paris-like attack could happen near them.

In cable news, there’s the news page and the editorial page. Jim Acosta and Bill Hemmer work in the former.

But for one day with emotions still running high from an act of war striking the city of lights, both went outside the job description.

Given the circumstances and feeling around the country–France, U.S., Lebanon, civilization in general–both can be forgiven for doing so.