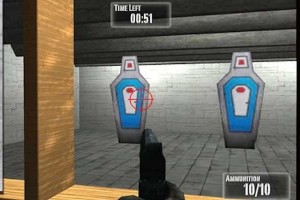 Violent video games have become a popular post-Newtown scapegoat for gun violence among two distinct groups: the people who would like us to focus on everything but effective gun regulations, and the people who humor them by pretending the issues have some sort of parity. Even President Obama included violent video games in his set of tyrannical fiat commandments, but very little attention has been paid to the fact that a group of U.S. Senators already took a stab at making it illegal to sell such games to children, and a cadre of activist judges has already ruled that unconstitutional.

The panicked effort to draw attention away from guns in the wake of the Newton tragedy has already caused some interesting reversals. NRA executive Wayne LaPierre, for example, demanded that Congress fund a police officer in every school, when weeks earlier, he had endorsed a presidential candidate* who openly mocked the idea of hiring more police, and urged (metaphorical?) revolt against the candidate who wanted to hire more cops.

Yep, it was none other than that bastion of conservatism, current Secretary of State Hillary Clinton. It may also surprise you to learn that Sen. Clinton’s Family Entertainment Protection Act was co-sponsored by three Democrats. Well, one of them was Sen. Joe Lieberman (I-CT), but that still kinda counts.

The bill died in committee, but that hardly matters, because the U.S. Supreme Court later ruled that such a law violates the First Amendment. Which flaming liberal activist judge led the court in this tightly-contested, Holly-weird-protecting ruling?

“Like the protected books, plays and movies that preceded them, video games communicate ideas — and even social messages — through many familiar literary devices (such as characters, dialogue, plot and music) and through features distinctive to the medium (such as the player’s interaction with the virtual world),” Justice Scalia wrote. “That suffices to confer First Amendment protection.”

Depictions of violence, Justice Scalia added, have never been subject to government regulation. “Grimm’s Fairy Tales, for example, are grim indeed,” he wrote, recounting the gory plots of “Snow White,” “Cinderella” and “Hansel and Gretel.” High school reading lists and Saturday morning cartoons, too, he said, are riddled with violence.

That’s not to say that nothing should be done about violent video games, or even that this law will always be unconstitutional. Then-Sen. Clinton may have been on the right track in comparing violent video games to cigarettes, but she’s way ahead of the research. The Court’s 7-2 decision is based on protecting the forms of expression found in video games, but it doesn’t appear (at least to me) to preclude some future ban based on a proven medical effect of the process of playing such games. Maybe we could ask Dan Abrams about that. If it’s not the speech that’s proven harmful, but the method of delivery, a future Supreme Court may decide differently.

People with good-faith concerns about violent video games should support effective research into their effects on children, and let retailers know they support store policies that keep children from buying them, but they should not allow themselves to be distracted from regulating instruments of proven harm that our constitution allows us to.

*The Republican nominee for president in 2012 was a man named Mitt Romney.