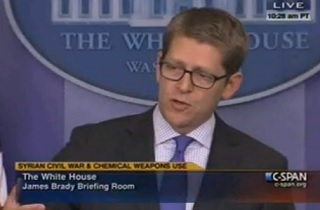 For the past two days, the White House press corps has pressed White House Press Secretary Jay Carney for some indication of how President Obama‘s deliberations on a response to Syria‘s large-scale use of chemical weapons will turn out. At Tuesday’s daily briefing, Fox News’ Ed Henry appears to have shaken loose a morsel of the administration’s thinking when he asked Carney about a 2007 statement. by then-Senator Barack Obama, that a president only has constitutional authority to strike militarily if there is “an actual or imminent threat to the nation.”

While Carney refused to speculate about Congress’ role in authorizing a hypothetical response elsewhere in the briefing, his response to Henry seems to hint that the administration reserves the right to engage Syria militarily, without authorization from Congress.

Henry began by quoting a portion of a 2007 Boston Globe candidates’ questionnaire, in which then-Senator Obama said that “The President does not have power under the Constitution to unilaterally authorize a military attack in a situation that does not involve stopping an actual or imminent threat to the nation, and asked “Does the President still agree with that?”

“Absolutely,” Carney replied, adding “but you are trying to get me to engage in a discussion about a decision that has…”

“Now it’s not about hypotheticals,” Henry interrupted. “We are within days, or even hours of the President making a decision, correct?”

Carney carefully constructed his answer from other answers he has given these past two days. “It is correct that the President is working with his national security team to respond to the clear violation of an international norm, by the Syrian regime, with the use of chemical weapons against civilians,” carney said. “It is clearly in the United States’ national security interest that norm be maintained, because the consequences of that standard dissolving are enormous, and detrimental to the interests of the United States, and detrimental to the international community, and partners in the region and the world at large.”

“Candidate Obama said ‘an actual or imminent threat to the nation,'” Henry pressed. “Do you believe that exists?”

“I believe, absolutely, allowing the use of chemical weapons on a significant scale to take place, without a response, would present a significant challenge,” Carney said, with a hesitation, “or threat to the United States’ national security.”

“Not just our allies in the region, but the United States?” Henry asked.

While Carney continued to avoid the many hypotheticals that were thrown his way regarding a response to Syria’s use of chemical weapons, the answer to Henry’s question, particularly his followups, appears to indicate a desire to keep the Syrian situation within the category of threats that the President can respond to without authorization from Congress.

Here is the full question and answer from that 2007 Boston Globe candidates’ questionnaire:

Q: In what circumstances, if any, would the president have constitutional authority to bomb Iran without seeking a use-of-force authorization from Congress? (Specifically, what about the strategic bombing of suspected nuclear sites — a situation that does not involve stopping an IMMINENT threat?)

A: The President does not have power under the Constitution to unilaterally authorize a military attack in a situation that does not involve stopping an actual or imminent threat to the nation.

As Commander-in-Chief, the President does have a duty to protect and defend the United States. In instances of self-defense, the President would be within his constitutional authority to act before advising Congress or seeking its consent. History has shown us time and again, however, that military action is most successful when it is authorized and supported by the Legislative branch. It is always preferable to have the informed consent of Congress prior to any military action.

As for the specific question about bombing suspected nuclear sites, I recently introduced S.J. Res. 23, which states in part that “any offensive military action taken by the United States against Iran must be explicitly authorized by Congress.” The recent NIE tells us that Iran in 2003 halted its effort to design a nuclear weapon. While this does not mean that Iran is no longer a threat to the United States or its allies, it does give us time to conduct aggressive and principled personal diplomacy aimed at preventing Iran from developing nuclear weapons.